Against the backdrop of the 70th anniversary of the Schuman declaration, we publish a series on the EU’s future. Our Young Professionals Advisors reflect on the current state of the EU and propose a way forward to overcome the crisis. Read their view on how the EU should manoeuvre through the upcoming economic crisis.

While our first article has identified troubling developments in the field of democracy, we now focus on the financial and economic outlook for the EU. Member states’ economies have taken a hit in order to protect a greater good, the health of all Europeans. As a consequence, countries are sliding into recession, leading to a sharp uptick in unemployment as businesses struggle. We are facing an enormously difficult situation: massive debt, economies in decline, significant levels of unemployment as well as instabilities in our neighbourhood. There is no doubt that the coming decade will test us to the limit. To avoid past mistakes, the EU needs to act quickly guided by values of unity and solidarity.

Around 2.7 billion workers are affected by the lockdown measures implemented globally, according to the International Labour Organization (ILO). The closure of many workplaces has led to a surge in unemployment rates. Another forecast from the ILO estimates that unemployment in Europe is likely to grow by around 3.3 percentage points during the second quarter of 2020, putting jobs of 12 million Europeans at risk.

Whilst the tech economy is performing well under COVID-19 – IT, online retail and digital service providers are seeing massive growth – the pandemic has a negative impact on nearly all industries. The overall outlook is dire especially for aviation, tourism, accommodation services and even manufacturing. In southern EU countries e.g., tourism is a vital pillar of the economy: this sector accounts for around 13.3% of the gross domestic product in Italy and the 14.7% of all jobs in Spain. Such a loss of GDP also has spillover effects on other industries as consumption and demand drops.

In a recent United Europe Webconference Italian economist Filippo Taddei analysed that the current crisis is a combination of two shocks: a combined demand and supply shock, posing a direct threat to the EU’s most important achievement, European integration via the creation of the single market. While it is still too early to analyse the full scope of the lockdowns’ economic consequences, we can get some pointers from Eurostat’s preliminary GDP figures which shed some light on future developments. During the first trimester of 2020, the EU’s GDP decreased by 3.5%. This is the sharpest decline since crisis-year 2009. Countries like Italy (-4.7%) and France (-5.8%) are now in a recession and Spain (-5.2%) records its worst economic downswing since the 1970s. These figures clearly show that the EU is in a crisis scenario.

We urge the EU to prioritize a coordinated yet decisive response to the crisis. It is the best course of action to mitigate the economic shock and pave the way to a swift recovery.

Not all member states are in a position to allocate financial resources at a scale that sufficiently minimises the economic and social consequences of COVID-19. In fact, those hardest-hit by the pandemic are also some of the most indebted. Most likely, some states will require assistance. Yet the question of how this assistance will be financed is controversially discussed. Corona Bonds, a mechanism for issuing common debt, is preferred by southern Europe, most prominently by Italy. The northern countries, including the “frugal four” Austria, Denmark, Sweden and the Netherlands, mostly oppose it. The topic of Corona Bonds has become politically challenging in both northern and southern countries and the EU will most likely not reach a unanimous decision on this.

In the mentioned United Europe’s Webconference Ulrike Guérot warned that populists in northern and southern countries will misuse the topic of Corona Bonds for their own cause. The EU has to be aware that a decision will potentially trigger antidemocratic reflexes, in northern as well as southern Europe. With any legislative and regulatory framework for issuing Corona Bonds likely to be lengthy, it might not be the appropriate quick action response needed for this crisis.

The Eurogroup finance ministers recently agreed on €240bn support through the European Stability Mechanism (ESM). Eurozone countries can take on debt as high as 2% of their GDP at low-interest rates. The only condition tied to these loans being that funds are used for medical expenditure only, necessary to prevent or curb the spread of COVID-19. We fully support low conditionality for such funds in order to swiftly help save lives and lively hoods of EU citizens.

As the Eurozone does neither comprise the entirety of the EU, nor Europe, we propose to establish similar loan schemes on a broader scale via the European Investment Bank. This scheme should reach all EU member states and additionally consider the EU’s immediate neighbours such as the Western Balkan states.

In addition to such quick-response measures, a comprehensive reconstruction programme is required to support the rehabilitation of the economy in the long run. In order to finance such a programme, the EU should indeed consider joint debt issuance. Funds from such a programme could be conditioned. As EU member states would be jointly liable for these funds, the usage of these should be jointly agreed upon.

Funds from this rehabilitation programme should comprise two conditionality dimensions:
1) the state of democracy and rule of law of the recipient country. As we have seen troubling developments regarding the levels of freedom and democracy during the current crisis, making funds conditional on certain aspects is a powerful way of supporting democracy within the EU.
2) rebuilding the EU economy provides a chance to structurally reshape it. Funds that are used to support member states’ economies should consider conditions in line with the EU’s Green Deal and Digital Strategy. This way, the EU can support the establishment of a sustainable digital economy that is resilient enough to pay off the debt accumulated in the current crisis. As this is in the interest of all EU member states, we believe that joint debt issuance is a financing vehicle that is worth considering.

Although the quest for the right combination of measures goes on and positions seem to fortify, all parties should remember that it is in the interest of all Europeans that all states recover from this crisis. Schuman stated that solidarity is created through economic interdependence. Europe is economically interwoven and, hence, needs solidarity. Otherwise, one failing country might kick-off a domino effect.

Whichever is the final design of a financing mechanism, the Union should avoid the divides that characterized the crisis in 2010-2012. After all, the pandemic is an exogenous occurrence, for which no member state is to blame.

There is no time to hesitate, to look backwards or inwards. “Europe will be forged in crises, and will be the sum of the solutions adopted for those crises”, said Jean Monnet. Therefore, let’s forge Europe once again, together in a spirit of solidarity and joint purpose. 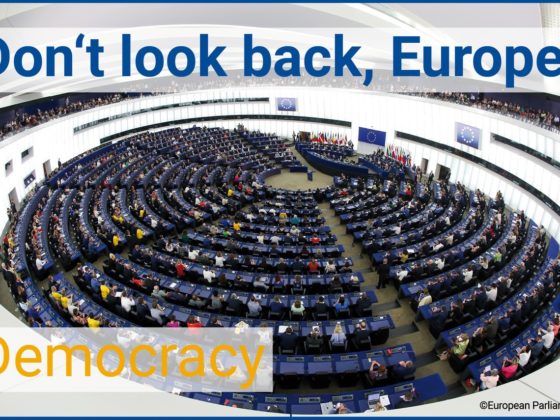