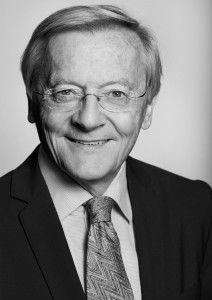 Dr. Wolfgang Schüssel, a conservative politician with strong liberal economic convictions, was Chancellor of the Federal Republic of Austria between 2000 and 2007. During those seven years, he was staunchly committed to improving his country’s ability to compete in the global economy. The tax and contribution ratio was reduced even while public debt levels were brought down. State companies were privatized, and there were reforms of the public sector and the pension system. It was during Schüssel’s time in office, too, that Austria for the first time ever made restitution payments to victims of the Nazi regime.

Before becoming chancellor, Schüssel had served as economics minister, foreign minister and vice chancellor in several governments.  In 1995, he was elected chairman of the Austrian People’s Party which under his leadership overcame its internal divisions.  At the federal elections in 2002, it obtained its best result in nearly four decades, becoming the strongest group in the Nationalrat, the Austrian federal parliament.

After serving as Chancellor, Schüssel continued to be a member of the Nationalrat for another four years until he left the parliament in 2011.  He serves as President of the Austrian Society for Foreign Policy and the United Nations. He is also a member of the board of trustees of Germany’s Bertelsmann Foundation and a member of the supervisory board of RWE.

Wolfgang Schüssel was born in Vienna on June 7, 1945. He attended Vienna’s distinguished Schottengymnasium before studying economics and law in the Austrian capital. Schüssel was only 23 years old when he received his doctorate in law. Schüssel plays several instruments – piano, accordion, guitar and cello – and likes drawing caricatures.

„Europe is a huge opportunity – but its solidarity has taken for granted. Europe must strengthen its “We-feeling” and connect for the digital future.“