Inspired by the article series “Europe can do better”, published by United Europe and German newspaper “Handelsblatt”, the Dutch newspaper “Het financial Dagblad” has published views of eight Dutch CEOs and their visions for a joint and competitive EU. Please find following the article of Frans van Houten, CEO von Royal Philips:

For the past 35 years, I have lived in six different countries, including Germany, the United States and Singapore, but for me the Netherlands is one of the most attractive places to live and work. It is beautiful and safe here, there is good education and good health care. This is shared by many Dutch people. According to the Central Bureau of Statistics, almost 9 out of 10 Dutch people say they are happy.

But although the Dutch are satisfied with their own lives, there is also a feeling of dissatisfaction with society. The aftermath of the crisis is still undermining confidence. The ongoing digitalisation and automation are feeding the fear of job insecurity and stagnating incomes, and environmental concerns are also increasing. In addition, the benefits of the European Union and globalisation are being called into question more than in recent decades.

It is perhaps a reflex to retreat behind the dikes, or to be ‘against’. But that will not work at all. In order to be able to finance a vital society in the Netherlands, to maintain welfare and prosperity, and to be able to help people who are struggling, sustainable economic growth of more than 2% per year is necessary. We can only achieve this if we take initiatives.

“The European Union is certainly not perfect. The bureaucracy must be reduced and the clout increased”. As a small country in Europe, we are dependent on foreign countries. For example, Dutch exports account for no less than 32% of gross domestic product, and international trade is a crucial source of jobs. Because of their international activities, multinationals account for two-thirds of the turnover of Dutch businesses and, crucial for economic growth, for more than half of the added value.

Philips is also heavily dependent on foreign countries. Although only 3% of our global turnover of €18 billion is generated in the Netherlands, we have many activities here. Thanks to exports and the favourable business climate, it pays to spend €700 million a year on R&D in the Netherlands.

So we have to earn our living mainly across national borders. That is why the Netherlands must continue to distinguish itself worldwide in terms of knowledge, creativity, entrepreneurial power and productivity. Fortunately, we are good at that. In 2018, the World Economic Forum published a ranking of the competitiveness of 140 countries. The small Netherlands is in sixth place on this list.

In order to keep this competitive strength of the Netherlands strong, we must continue to invest in talent and entrepreneurship. In order to do so, we need Europe. After the US, the European Union is the largest economic area in the world, with freedom of movement of people, goods, services and capital.

For the Netherlands as a knowledge economy, it is important that the knowledge we generate here is put to work so that it contributes to economic growth. A proven fertile environment for knowledge valorisation is an innovation campus, of which the Netherlands has 17. The largest is the High Tech Campus in Eindhoven, founded by Philips, which is attended by new companies and start-ups every year. However, this rapid growth needs to be fed by highly educated employees from colleges and universities in the Netherlands and abroad.

Now I would like to say that the European Union is certainly not perfect. The bureaucracy should be reduced, and the power to act should be increased. Together, the Member States could do more to improve its competitive position in relation to the US and China, for example in the field of artificial intelligence. Improving Europe in terms of employment, climate and social cohesion will only be possible if we make positive and constructive efforts. We must not, therefore, be seduced by the recruitment campaigns of some politicians who pretend to be able to withdraw behind the dikes. I am an optimist. I firmly believe that, as the strong Netherlands, we can seize opportunities in a united Europe. Let us do this together. 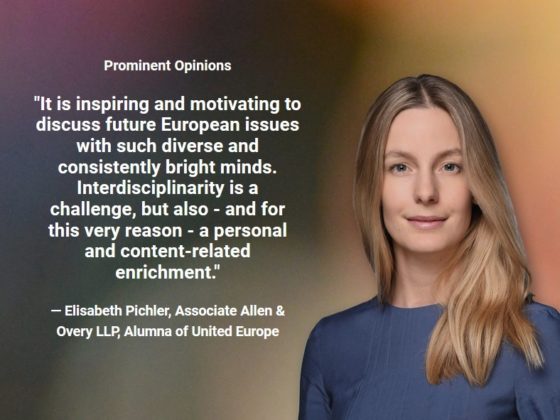 Voices from our Alumni

In my area of expertise, that means to fully understand #digitalization with its far reaching impacts in order to r… https://t.co/IbBe3kpnAq
10 hours ago
Follow