Shortly after the EU elections, Airbus will celebrate its 50th anniversary. To mark this milestone, in our article series “Europe can do better. How our continent finds new strength. A wake-up call from economy”,  former Airbus CEO Tom Enders sketches out the future of the European aerospace industry. He makes a plea for a bold, unified Europe willing to address the challenges of the future.

2019 will be a turning point for Europe. Firstly, because the balance of powers within Europe is shifting: Britain’s (regrettable!) departure will see the EU shrink for the first time in its history. This year will also see EU citizens elect new political leaders. At the same time, the EU has never before been faced with so many challenges: growing populism, looming trade disputes, disruption of technologies and entire economic sectors, a possible recession…

The same is true for Airbus, one of few truly European companies. At the end of May, we will celebrate our 50th anniversary – an occasion to commemorate the pioneering spirit of the handful of aerospace industry leaders and politicians who had the courage to contest the seemingly insurmountable US monopoly of McDonnell Douglas, Lockheed and Boeing. Their vision, of a pan-European aerospace business able to compete on equal terms with the US, has been realized. Today, the European aerospace industry employs 500,000 people, and has never been so economically important. You only have to look at Germany. The German aerospace industry employs over 110,000 highly-qualified people, generating a turnover of around 40 billion Euros. One-sixth of new civil aircraft worldwide are coming from Germany.

A golden age one might say? Not at all. Because these figures are history. In the past, the main challenges were increasing production, integrating our operations across borders, and reducing costs. The challenges of the future will be of a different kind altogether. So what can the European aerospace industry expect?

Firstly, whereas in the past most developments were linear, the future will be marked by exponential changes. With regard to technology in particular, these changes have already started to hit us. Data is conquering the world. To make our aircraft even more reliable, less costly, and more environmentally-friendly, data is now just as important as conventional engineering disciplines. Of course, we will continue building aircraft, helicopters and satellites, but the future competitiveness of European aerospace will be determined by our ability to harvest, understand and utilise this data. And the question is, are we better placed to do that than others? Which leads me to my next point.

Secondly, we are already experiencing tectonic shifts in the global competitive landscape. Powerful new players are emerging – from other regions, such as China, but above all, from other industries. A whole series of American digital billionaires have already invested in new aerospace companies. What would happen if the top players – the American GAFA giants (Google, Apple, Facebook, Amazon), or the Chinese BAT trio (Baidu, Alibaba, Tencent) – decided to seriously engage in our industry? Or to forge alliances with our American and Chinese competitors? That kind of digital pioneer is lacking in Europe. We’ve got to face up to that!

Thirdly, despite the forecasts of doom-mongers, employees will become even more important in the future! Globalisation and digitalisation will intensify competition for the top minds. And it will no longer be enough to draw in Europe’s “best and brightest” – we need to be scouting for talent worldwide. We are also facing a drastic generational change: at Airbus alone, in the next 10 years we will see 30% of our workforce retire or leave the company due to natural fluctuations. Data experts in particular will be in high demand. We will need to rethink our entire approach to acquiring and developing the skills we need. In the workplace of the future, lifelong learning and open innovation will not only be a reality, but a necessity.

Fourth, another priority is to speed up our transition towards sustainable flight. The number of aircraft is set to double in the next 15-20 years. This is certainly a great business prospect, but even more importantly, it’s a major responsibility! Ten years ago, airlines, manufacturers and airports made a commitment to improve fuel efficiency by 1.5% per annum by 2020. We are on track to meeting this. Our industry also made a commitment to achieve carbon-neutral growth by the next decade. To realize this ambition, we are, as a sector, working towards the implementation of a global carbon offsetting scheme. Looking further ahead, it’s our aim to halve net aviation emissions by 2050, compared with 2005. This would be a significant contribution to the goals of the Paris climate change agreement.

Exponential disruption, a revolution in the competitive landscape, tougher competition for the best brains, the dilemma of growth versus sustainability… How can the European aerospace industry adapt to these unprecedented changes? The transformations taking place around us are going to accelerate further still in the 2020s, so it won’t be enough for companies to rely on their own skills or even on developing these skills, because that will take too long.

Instead, we need to learn how to work together differently! Airbus will never become a digital company, but we can enter into partnerships with leading technology companies operating in fields such as big data, artificial intelligence and machine learning. Take Airbus’ partnership with Palantir, a global leader in big data, for example. This partnership supports us in harnessing the huge quantities of data generated during aircraft development, production and operation in order to make our aircraft even safer and more efficient. In conjunction with Palantir, we have created a unique platform in the aviation sector: Skywise. This platform analyses vast amounts of data, allowing airlines to improve the operational reliability of their aircraft. Since its launch, more than 3,000 aircraft have been registered on Skywise. In just a few years, this partnership has catapulted us to the forefront of our industry in terms of big data.

The same is true for the environment. Here too, the European aerospace industry needs to team up with other industries. One example of this is the E-Fan X project in which Airbus is working with Siemens and Rolls Royce on a hybrid-electric aircraft demonstrator. Our goal is to achieve carbon-neutral growth within the next decade. But we will only achieve this once we consider sustainability as a competitive advantage.

We also need to rethink our organisational structures. Aerospace companies, like other corporate groups, have in some ways grown to be bureaucratic beasts, unable to handle today’s speed of change. We need flatter and more flexible organisations. At Airbus, we unleash the full creative potential of our employees via “empowered” and “exponential” teams. The same goes for open innovation: if we want to quickly and purposefully acquire new areas of expertise, e.g. in quantum computing or autonomy, then we need to open up – to start-ups, students and researchers all around the world. And this goes hand-in-hand with new leadership virtues: coaching and communication have become more important leadership virtues than command and control!

European politics and business must pull together in one direction. Our goal must be to strengthen European strategic sovereignty. Consider these two examples:

Space: Is Europe prepared to invest in its independent access to space, or will we eventually become dependent on American, Russian or Chinese launchers? In an era in which we communicate via satellite and even mine raw materials in space, this is a question which Europe needs to answer quickly.

Defence capabilities: How is Europe to keep pace on the global stage if we continue to waste important resources in the duplication, or even triplication, of development work, while joint projects are thwarted by national export regulations for example? That’s the pivotal question for the future of the European defence industry. If large programmes such as the European Future Combat Air System (FCAS) cannot export, they will not be able to produce sufficiently large quantities at competitive costs.

The question of sovereignty extends far beyond today’s horizon. Consider the (not unrealistic) possibility that in 20 years’ time it will not be the US or Europe which leads in big data and artificial intelligence, but China. How are we preparing for that? What new kinds of cooperation and partnership should we be pursuing? If European aerospace is still to be competitive 20 years from now, relying almost exclusively on European and North American partners will no longer be sufficient. We need new structures and partnerships which transcend the geopolitical blocks that still shape the thinking of our industry today, and maybe even that of politics and the economy in general. But are the Airbus home countries and the EU willing to play their part in this?

The rejection of the Alstom-Siemens project by the EU Commission gives cause for concern. Apparently, politicians and economic leaders are becoming less and less able to construct a shared perspective and make future-oriented decisions. The speed and radical nature of the changes to which companies find themselves exposed are not recognised, or are simply ignored, by a large majority of politicians in Europe, particularly in Germany. “Too little, too late”!

However, since aviators and pilots are incurable optimists, I hope that the upcoming EU elections will serve as a starting shot for regeneration in Europe. If the EU is to retain its power to act, it needs to become more determined and more purposeful, because many European companies cannot wait for government guidance. Pioneers will have to get out there in front and make bold, pro-active decisions. This was done 50 years ago, creating the European aerospace industry. Such an approach is even more important today.

About Dr. Tom Enders:
Dr. Thomas (“Tom”) Enders was appointed Chief Executive Officer (CEO) of Airbus SE, from 1st of June 2012 until April 2019, after having been CEO of the Airbus Commercial Aircraft Division since 2007. Before that he served as Co-CEO of EADS between 2005 and 2007. He was Head of the Group’s Defence Division from 2000 to 2005. He has been a member of the Executive Committee of Airbus S.E. since its creation in 2000.
Prior to joining the aerospace industry in 1991, Enders worked, inter alia, as a Member of the “Planungsstab” of the German Ministry of Defence and in various Foreign Policy think tanks. He studied Economics, Political Science and History at the University of Bonn and at the University of California in Los Angeles.
In 2014, Enders joined the Advisory Council of the Munich Security Conference as well as the Senate of the Max-Planck-Gesellschaft. He is patron of the German Mayday Foundation which supports airmen, women and their families in times of need.
Tom Enders is a member of the BDI Board (German Industry Association) since 2009, the Governing Board of HSBC Trinkhaus since 2012, the Joint Advisory Council of Allianz SE since 2013 and the Supervisory Board of Linde AG since 2017.

Martin Brudermüller: What‘s the matter with Europe? We need a new Europe of ideas! 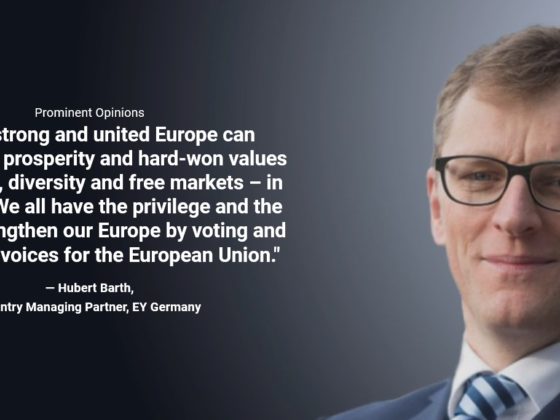