Final event of the Rome Manifesto Tour in Brussels

After more than 20 events in seven European countries, the final event of the Rome Manifesto took place on 27 November in the European Parliament in Brussels.

Together with the German-Italian Centre for European Excellence, Villa Vigoni, United Europe brought together a group of leading young scientists and professionals from Europe at the beginning of 2017 to develop a far-reaching proposal for the renewal of the European constitution. On 25 March, the 60th anniversary of the signing of the Treaties of Rome, the 18 authors presented the Manifesto at the German Embassy in Rome. They propose the creation of a European Federal Union with more democratic and transparent institutions and clearly defined competences.

Now, eight months later, the results were presented and discussed in the European Parliament. Participants included former Italian Prime Minister Giuliano Amato, Judge of the Italian Constitutional Court and Vice-President of the Convention on the Future of Europe, Mercedes Bresso, Member of the European Parliament, Michele Valensise, President of Villa Vigoni and former Secretary-General of the Italian Ministry of Foreign Affairs, Ambassador Maurizio Massari and three authors of the study: Valentina Volpe, Associate Professor of Public International Law at the Lille Catholic University and Senior Research Affiliate at the Max Planck Institute for Foreign Law and International Law, who moderated the discussion, Federico Fabbrini, Director of the Brexit Institute in Dublin, and Matteo Scotto, Research Fellow at Villa Vigoni.

It is perhaps the first time that such a lively debate on the future of the European Union has taken place, Mercedes Bresso said at the beginning, and every day there are new contributions to it. The European Commission has meanwhile drawn up a whole series of, including the White Paper and Jean-Claude Juncker’s address on the state of the Union on 13 September, which also refer to the Rome Manifesto. The European Parliament now sees a need to reform the European Union. There are numerous proposals from citizens’ initiatives and, not least, from French President Emmanuel Macron on reforming the EU. According to Bresso, what is still lacking is clear transparency, profound efficiency and visibility: “Many citizens do not understand what the European institutions are doing, and decision-making processes often take too long. The democratic process should not be a one-way street. The Rome Manifesto is intended to serve as a basis for discussion for a reorientation of the EU, taking into account the wishes of European citizens, especially those of the younger generation.”
Villa-Vigoni President Michele Valensise is convinced that the Manifesto’s proposals will bring us closer together rather than divide us. The principle of subsidiarity is an important component of the EU. When Europe is faced with enemies, Valensise said, “friends must come together and speak out in favour of Europe, and the Rome Manifesto should also serve to give greater weight to the founding values of the EU.”

Federico Fabbrini pointed out that the positive events of the recent months had improved the political climate in the EU as well as the willingness to give more support to the European project. In addition to the election of Macron as French President, the Rome Manifesto is one of these positive initiatives. Obviously these positive events are somewhat overshadowed by Brexit, but even this could be seen not only as a challenge but maybe even an opportunity for change. With it the legal framework must be adapted to an EU of only 27 member states, including solutions for the new financial situation as well as the composition of Parliament to name but a few. In his view this requires a large-scale approach. A major obstacle is the requirement for unanimity, in which a small country such as Ireland could use a veto to block progress. This would make it difficult to reach a consensus on any substantial reform ideas. The Rome Manifesto and its proposals are an important step towards contributing to a federal constitution, easing the current stumbling blocks.

Italian Ambassador Maurizio Massari stressed the importance of treaty amendments in order to serve the interests of European citizens. Anti-European forces such as populism and nationalism counteract this trend. The question of the will for progress is reflected in the Rome Manifesto. “Objectively, we need to achieve more integration faster”, Massari concluded. “Some European member states must show their true colours and define clearly which Europe they want.”

Former Italian Prime Minister Giuliano Amato pointed out the clear distinction between young and older Europeans, which is of no less importance than the division between Northern and Southern Europe. Part of this rejection of the older generation stems from the unwillingness to accept diversity – and it is this part of our society, Amato said, that is currently “the one that leads several parts of our countries”. The younger generation would not have this rejection. The problem for the older generation is to keep Europe alive until the younger generation can take over. “They will do what we were unable to do for various reasons.” There now is a unique opportunity to reshape Europe. Europe must be created, it is only a step-by-step process. For years, solidarity within the EU has grown, but in recent years it has decreased again. Before taking a final step towards federalisation, it might be necessary to consider how solidarity among each other could grow again.

“Europe will not be made all at once, or according to a single plan. It will be built through concrete achievements which first create a de facto solidarity,” French Foreign Minister Robert Schuman has stressed in his speech to Europe on 9 May 1950. We, United Europe, the Villa Vigoni and the authors, are convinced that the Rome Manifesto contributed serves as a great basis for the ongoing discussions and as such is another one of these important steps towards a more united Europe.

If you too would like to join our discussions about the future of Europe, please contact us by email: 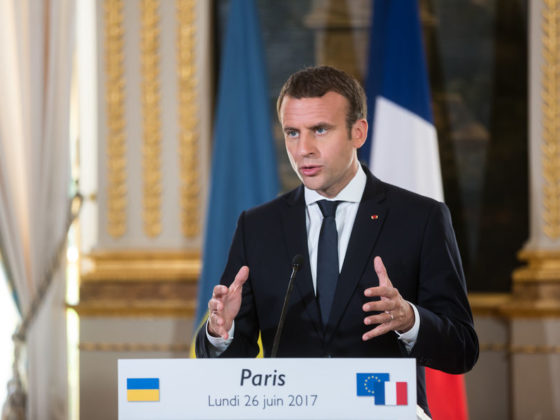 Emmanuel Macron is honoured with the Charlemagne Prize 2018