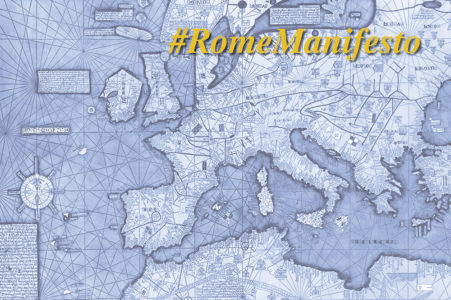 With the Rome Manifesto, a group of leading young European scholars and professionals supported by United Europe and Villa Vigoni has put forward an ambitious proposal for the renewal of the European project. The 18 authors presented their plan at the German embassy in Rome as part of the official celebrations for the 60th anniversary of the signing of the Rome Treaties. They propose the founding of a European Federal Union based on more democratic and transparent institutions as well as a clear definition of competences.

“We propose a European Federal Union that can effectively address challenges that are beyond the scope of individual nations: defence for instance, but also safeguarding the single market and the common currency,” said Claudia Schmidt, a European affairs specialist in Frankfurt and co-author of the manifesto. “Some competences can be given back to the national level. We do not want a European super state.”

The manifesto project was organised by the German-Italian Centre for European Excellency Villa Vigoni and the non-profit association United Europe, a pro-European initiative headquartered in Hamburg. The authors from Italy, Germany, Croatia, the Netherlands, Britain, Austria, Greece and other European countries, all in their twenties and thirties, were chosen by both organisations for their intellectual strength and their commitment to the European idea.

“We, the young generation, see it as our duty to not only uphold Europe’s legacy, but to strive for its urgent renewal,” the manifesto says. “We have experienced open borders and easy traveling, a single currency and common citizenship, education exchanges and new technologies, all of which have allowed us to meet other Europeans and concretely enhanced our conviction of belonging together.”

For the implementation of their plan, the authors of the Rome Manifesto propose a new procedure. Delegates from all European countries should assemble in Rome as early as 2017 and draw up a constitution for the European Federal Union. This constitution will enter into force as soon as soon as it has been ratified by a majority of today’s EU countries.

“This is how the United States were founded,” said Federico Fabbrini, law professor in Dublin and co-author of the proposals. “By following their example, we create a completely different dynamic from today’s treaty changes. Countries lose the power to block the entire process; instead they will need to ask themselves whether they want to be in or out.”

Supporters of the proposals can sign the Rome Manifesto online. Together with cooperation partners in several European countries – universities, think tanks and foundations – the Rome Manifesto will be presented to a wider public in the coming months. For twitter updates, please follow #RomeManifesto.