At a United Europe Dinner in Hamburg on June 16, Peter Sutherland, former Irish EU commissioner and Director General of the WTO, explained his view on Britain’s estrangement from Europe. While acknowledging the differences shaped by history and experience, Sutherland warned that Europe could not sacrifice its principles in order to satisfy Britain. The reply was given by Simon McDonald, British Ambassador to Germany.

Just why are the British so unwilling to commit themselves to European integration? At a United Europe Dinner in Hamburg on June 16, the Irish statesman and businessman Peter Sutherland said the roots of that attitude go back over centuries. “The British have concerns about entanglements in the European theater”, he explained. “We must accept that there is a difference of view that is fundamentally about the whole concept of sharing sovereignty. Many of us believe in the concept which is inherent to the project. Many in Britain would prefer intergovernmental co-operation only. But Britain brings enormous positive elements to the EU. We must convince it to remain”.

Curiously, much of Sutherland’s historic view was echoed by Simon McDonald, the British Ambassador to Berlin, who had come up to Hamburg to give the reply to Sutherland’s speech. “Throughout the centuries, the United Kingdom has tried to minimize involvement on the continent,” McDonald said. He added that historically, Britain had pursued a balancing act on the continent which was aimed at checking any power that might become dominant.

This lively discussion about the reasons for Britain’s estrangement from Europe took place in the dining hall of the historic Übersee-Club, a beautiful villa built by one of the great Hamburg trading families in the early 19th century. With 50 guests – members and supporters of United Europe from business, politics, diplomacy and academia – it was an intimate and convivial setting to engage in a debate that is certain to shape European politics over the next several years.

Here, Wolfgang Schüssel, former Austrian chancellor and President of United Europe, set the tone with some light-hearted remarks about this being a contest between two knights – Sir Peter, and Sir Simon who had received his title just the weekend before.

Sutherland spoke as a passionate European, but also as somebody who knows Britain extremely well. Certainly, he did not avoid some criticism of the UK position and that of British Prime Minister David Cameron who, if re-elected next year, plans to hold a referendum on British EU membership in 2017. Sutherland said that Cameron had demanded change in Europe and had even set up a civil service review to define necessary reforms. Yet nothing concrete had been put forward. “The only specific thing that he said is that he is opposed to the preambular aspiration to a greater union of the peoples of Europe. So we are in a phony war because the definition of any proposed renegotiation has not taken place.”

Instead of proposing specific reforms, Sutherland said, the British government was engaging directly only on issues such as who should or should not become president of the EU Commission. “The British might be best advised to have an agenda that is defined clearly and that aims for a specific agenda for the next Commission, rather than Treaty change” the former Irish EU Commissioner added. “This should assist in providing greater coherence and advances in areas like energy, internal market and foreign and security policy, all of which deserve to be strengthened and not weakened.” Subsidiarity should also play a greater role in policy together with greater engagement by national parliaments.

While stressing the terrible loss that a British exit from the EU would mean for Britain and the rest of Europe, Sutherland also made it clear that there were clear limits to the concessions that Britain could expect. “We must accept that there is a difference of view,” he said. “The British view of Europe is one of sovereign nations cooperating as nation states. I have a view of a European Union of shared sovereignty and of supremacy of European law. It is, inconceivable that the nature of the project can be changed but it certainly can be more effective and responsive to real needs.”

In his reply, Ambassador McDonald called for more understanding of the British position, pointing out how traumatic some of Britain’s historic experiences in the EU had been. It was the only one of today’s 28 EU countries that experienced a deep recession immediately after becoming a member in 1973, he said. Also, voters felt disenchanted when an earlier, Labour-led government refused to hold a referendum on ratifying the EU’s Lisbon treaty. Finally, McDonald added, the Euro crisis re-awakened British fears to be shut out from important decisions because it had not joined the single currency.

Two particular points of conflict emerged during the speeches and the debate afterwards: the issue of immigration; and the quarrel over who should be the next president of the EU commission. While Sutherland warned that no concessions could be made over the free movement of people in Europe, McDonald said his government was only seeking to restrict what he called “benefits tourism”. And while Sutherland spoke of an “unseemly debate” about the future Commission President, McDonald said that Cameron needed two vital partners in Europe: the German chancellor Angela Merkel and the future president of the Commission. “A pretty consistent integrationist – that’s not what we are looking for”, the ambassador said, clearly referring to Jean-Claude Juncker, the former Prime Minister of Luxemburg, who currently is the main contender for the job.

Yet divisions between the two speakers ran less deep than might have been expected. Clearly, both Sutherland and McDonald very much hope that Britain will remain a member of the European Union. Ambassador McDonald certainly struck a chord in this pro-European, pro-business audience when he said: “Leaving the EU would be a tragedy for Britain – we do not want to leave. But it would also be a tragedy for the rest of Europe if we were to leave.”

Once again, McDonald’s reply echoed much of what Sutherland had been saying. Yet Sutherland, with his enormous experience of life and of politics, closed his speech with a surprisingly hopeful tone for the future. “The British people, when asked, will in the end say yes,” this Irish statesman said. “They would have to be insane to say no to Europe. But this time, they will do it because they will have laid to rest some of the worst and most pernicious elements of the debate that has paralysed us so long in Europe.” 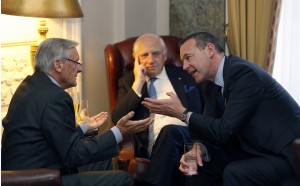 United Europe would like to thank the sponsors who made this dinner possible: the BMW group, the entrepreneur Jürgen Abraham, and a third and generous supporter who wishes to remain anonymous.

„30 years after the fall of the Berlin Wall, we are faced with the decision of whether to continue along the path of a peaceful, open-minded, competitive Europe or to spoil the future of our children.“