Due to the war in Ukraine and the current security situation, it is obvious that the EU must become a stronger and more capable actor regarding security and defence. The Strategic Compass, an EU strategy paper presents an ambitious action plan for strengthening the EU’s security and defence policy until 2030. United Europe in cooperation with the Würth Group, discussed this topic with the following guests on the 1st of June 2022 at the Representation of the State of Baden-Württemberg to the European Union.

Highlights of the discussion

Ursula von der Leyen, President of the European Commission, emphasised in her greeting quoted by Günther H. Oettinger that Putin’s aggression against Ukraine confirmed the need for and the timeliness of the Strategic Compass. Since the end of February, several Member States have announced new and substantive investments in defence. Leaders have committed to devote an additional 200 billion euros to defence capabilities over the coming years. Europe needs not only to spend more on its defence but also to spend better and together. Not only through joint research and development for defence, but also through joint procurement. Fragmentation and duplication are the enemies within. Investments worth 200 billion euros can unlock new economies of scale for our defence industry, leading to lower costs, more focused investments and greater capacity to meet rising demand in defence. More than ever before, the defence of Europe requires the Member States of our Union to act together.

Günther H. Oettinger, President of United Europe, emphasised that history proceeds by slow evolution and sudden accelerations. This is also true for European defence. Our cooperation on defence matters has intensified – slowly but steadily – for several years now. The Strategic Compass is conceived as a step in that process. The European Union should do more for its eastern neighbours, Ukraine, Moldova and Georgia. The war these days is old-fashioned. It’s about the weapons of the last century. The next war against Europe will come from digital technologies and Europe is not sufficiently prepared for this. This makes today’s discussion on the Strategic Compass all the more important.

Jean-Pierre van Aubel, an EEAS Expert in Defence Policy and Strategy, explained that the Strategic Compass provides for the first time in European history a threat analysis. The war in Ukraine, energy security, food security, the consequences of climate change, regional conflicts, and cyber-attacks are threatening the European Union. The threat analysis is the basis of the Strategic Compass demanding a more comprehensive answer than Europeans are used to. The crisis will not go away, and the European Union needs to be prepared and able to act. In addition, the 81 action plans of the Strategic Compass need to be financed. How do we counter cyber attacks, how can we guarantee access to strategic domains at sea but also in space? The European Union needs to invest in the operational sector, but the Europeans shouldn’t just spend more money, they should spend their money better. The current crisis has made one thing clear: The European Union is still too dependent on others. These days, everyone is talking about European dependencies on Russia. But the dependence on China is many times higher. To strengthen strategic autonomy, the EU should act together with its partners, e.g. strengthen cooperation with NATO, the United Nations and the OSCE. To ensure that the measures adopted by the Strategic Compass are put into practice, the member states have agreed to report to the highest level of the European Council on their progress. 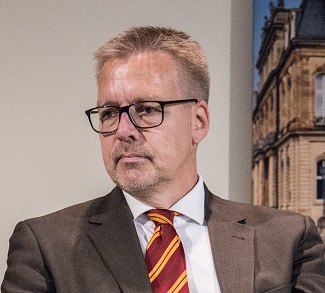 Dr Markus Kaim, a Senior Fellow in the Security Policy Research Group, SWP, would have liked to hear more about the future of US-EU relations in security and defence. “The emphasis is on US-EU relations because we tend to focus exclusively on NATO. And that would be my next question: How do we have to imagine an independent EU? I think that’s one of the homework assignments that European governments need to reflect on. The European Union is interested in becoming an effective security provider. What we desperately need here is political reform. Even if the EU will be equipped with capabilities, the question remains: Who will decide on the use of military means in the future?”

Heli Tiirmaa Klaar, Head of the Cyber Diplomacy Department at the Estonian Ministry of Foreign Affairs outlined, that the EU has many gaps in their defence capabilities. What needs to be done is to close those gaps in the real hard defence capabilities. And I’m glad to hear that there are 81 action plans by the EAS to do this. In the Ukraine war, we have to show strength and power. And it doesn’t matter whether it’s the conventional military or it is the cyber offensive. We have to show some teeth. And this is what Russia is afraid of. Russia is not afraid of our thoughts, prayers or any other humanitarian action. So we have to show strength and power. I think we have quite a good focus on the fight against disinformation. We have had many directives, regulations and other regulatory documents in the last ten years. However, our capabilities still need to improve significantly in the future. The Strategic Compass does not compete with NATO’s objectives.

The complete statement from Ursula von der Leyen is available under the following link  Strategic compass.

We thank our panellists for the engaging discussion. A warm thank-you also goes to our cooperation partner, the Würth Group, especially to Ms Schily and Ms Rau for their great cooperation, and to the staff of the Representation of the State of Baden-Württemberg to the European Union in Brussels.