On April 16th, the new president of United Europe, Günther H. Oettinger, introduced himself to the members of our Young Professional Advisor Group in an online meeting and discussed numerous topics with them. He presented his vision of United Europe and invited them to explain their views and take a stand.
After a short welcome and introduction by Sabine Sasse, Managing Director of United Europe, Dyria Alloussi introduced the advisory group. The discussion was moderated by advisors Anna Penninger and Anna Romandash.

Introduction by Günther H. Oettinger
During his introductory remarks, Mr Oettinger said that he couldn’t remember a time of similar significant change: nearly all citizens on all continents and nations globally are affected by the Coronavirus. For 60 years there has never been a challenge that affected several billions of people all at once. Mr Oettinger pointed out that this could also be a window of opportunity for showing solidarity, for collaboration and partnerships, from science and research to industries, for cooperation of governments in the EU to the US and to China: “Now is the time for a global public private partnership”, he stressed. “But instead we see more competition of orders, systems and values. We are facing a direct challenge to democracy, social market economy, freedom of press, religion and rule of law.”
According to Oettinger, although the values enshrined in the Lisbon treaties, like solidarity and best practices are moderated and coordinated on the European level, the main competencies and measures actually remain with the individual member states in Paris, Rome, Berlin, Tallinn, Vilnius, Bucharest etc.
However right now it is of utmost importance that the EU, as a multicultural organisation comes together in order to fight against the pandemic on a pan-European level, together with European partners such as e.g. Switzerland and Norway, candidates such as the Western Balkans and important neighbours like Russia, Turkey and Africa.
Whilst a balance of openness, solidarity and teamwork on a European and global level is needed for a meaningful cooperation to work, the EU should not be naïve either in terms of what it can expect from others.
Mr Oettinger appealed to the Young Professionals Advisors, as scientists, as advisors to ministries, as workers in public administrations, in business and in the media and economy to stay involved as they are perfect partners for United Europe and that he looks forward to their critical and constructive input.

Questions & Answers
The advisors asked various questions, such as what concrete steps could be taken to overcome the nationally focused agenda of the member states. Mr Oettinger noted that e.g. healthcare is a major competency of the individual member states, at their express wish in the past. However, the EU can and should add value through the provision of Research and Development capacities and by focusing on bringing experts together on a European level in various fields.

A young professional from Italy asked about the measures Mr Oettinger would prioritize to further facilitate the hiring and free movement of workers across borders in the Union.
Mr Oettinger acknowledged that closing the borders was not acceptable; He drew a comparison between the situation we face today and the refugee crisis in 2015. Back then, refugees from Syria and Afghanistan and the Maghreb crossed borders via the Eastern part of the Mediterranean namely to Greece and through the Western Balkan route to Budapest. He reiterated that a coherent European understanding and approach had been necessary and is needed today. The normalization of the Schengen borders is a common obligation and is in the interest of each member state; This should be immediately addressed.

An advisor from Lithuania asked about the negotiations of the MFF 2021-2027 and whether the European Commission will come up with a new proposal.
Mr Oettinger expressed his regret that the heads of states in the EU have not been willing to take the multiannual financial framework MFF as a priority and noted that no impressive steps have been taken yet. For Oettinger, the main focus remains on raising the level for new member states and rural – including less developed – regions to approach the European average level; he added that cohesion instruments as well as adjusted instruments for reconstruction and to fight the economic effects of Covid19 are needed.

An advisor from Ukraine asked if Mr Oettinger expects the economic canvas to change in the post-epidemic world and whether the crisis might lead to a greener future.
In his reply he emphasized that rather than depending on one supplier for crucial products, a certain level of autonomy and sovereignty must be preserved. For him, climate change is an on-going issue and has to be a priority. Whilst the Corona crisis will eventually come to an end, climate change will continue in the coming decades. Carbon leakage should be avoided in the efforts to reduce carbon emissions, otherwise European industry will lose out globally.
An advisor from Hungary asked about China’s global coronavirus rescue campaign and how this could affect the Sino-European relations and whether Europe should increase its economic assertiveness abroad and put forward a new strategy to face China in a post-Covid world.
Mr Oettinger explained that China was a partner on the one hand and a competitor on the other. Industries have to rethink their business models in the future not to be so dependent on imports from China. A bigger reserve of tools, products and medicine is needed to cope with such extraordinary situations. The EU has to put in work to convince industries not just to import products to the EU but to produce inside the EU. Investment attractiveness is crucial. It should be discussed and analysed what went wrong in the last weeks and years and what can be learned from it.

Another advisor asked how much the current COVID19 and Brexit-situation will affect the EU strategy towards the Western Balkans.
Mr Oettinger said that he could imagine that the six Western Balkan countries will have joined the EU by 2030, under the condition that they fulfill all their obligations in accordance with the treaty. Size-wise, he compared the integration of the Western Balkans with the reunification of Germany. Back then, around 18 million citizens from the former DDR integrated to West-Germany. With less than 20 million people living in the Western Balkan countries, he concludes, it should be manageable to strengthen their efforts to be accepted. A positive outcome would be a win-win for everybody.

An advisor from Germany asked the question what role the idea of a European defence force plays in the competition of system and orders, for the European Union to remain relevant and to become a global player in geopolitics.
For Mr Oettinger it is very clear that in 2040/50 none of the individual member states will have the power and clout to be relevant in global discussions on their own. For Oettinger only a united Europe, a European Union, , is powerful enough to be on a level playing field with the US, China and maybe other rising nations. For Oettinger internal and external security should be a European competency. He states also that a European army will play a huge role in defending human rights for example in Africa or in the Middle East. The first proposal in this direction has been submitted with the establishment of the European defence fund PESCO. That, he says, represents a first step in the right direction.

Mr Oettinger then took the conversation to the current Corona Bonds debate and pointed to the negative commentary and exchanges in the press between member states in the last weeks. He wanted to hear how citizens of the different member states perceived European solidarity. An advisor from Bulgaria suggested that the current debate in her homeland is perceived as an incentive to join the Eurozone and to accelerate application for the ‚EU waiting room‘. Another advisor shared his insight from the Baltic states and emphasised how much the Eurozone is perceived as a protection shield especially compared to the vulnerable situation during the financial crisis in 2008/2009. The Eurozone is seen as a pillar for the region’s economy.
An advisor from Italy agreed that the incentive for member states to become part of the Eurozone in times of crisis is much higher especially for those most affected by the crisis. For whatever overarching mechanism, having a strong currency is much more practical than depending on fluctuations and exchange rates as is the case for small fragmented currencies.
For Mr Oettinger, the challenges of the EU go beyond the 27 member states. At this point the EU’s main concern has to be Africa: “If our neighbour continent will be in a comparable dimension influenced by Corona it will be a terrible situation.”

An advisor from an Eastern Partnership country agreed with Mr Oettinger’s point about EU’s neighbourhood policy and added that in his homeland currency is not an issue at all but rather the perceived isolation. Concerns about human security are much more present than financial concerns. Another advisor added that in Turkey social and cultural effects of the pandemic on society are starting to show. Whilst the situation in the European Union is being closely watched in Turkey, negative reports about Europe are omnipresent in Turkish news. In Turkey and in the Eastern partnership countries, which are potential candidates for membership, public opinion and perceptions are shifting and it may undermine the perceived attractiveness of the EU in those countries.

Mr Oettinger concluded that openness and transparency are preconditions for any partnership. Whilst for example media transparency in the EU and even Germany is not perfect, news reports are quite objective and reliable in the European Union. One can follow the process and state of Corona infections via social media whilst in other countries one cannot be so sure whether the numbers can be trusted. To fight and manage a crisis however transparency and the independence of media, researchers and scientists are of utmost importance. 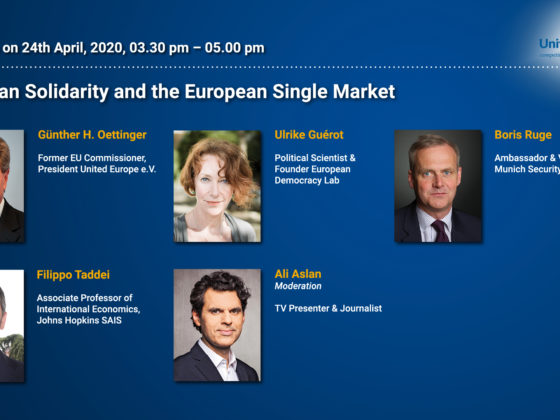 Also a great article in relation with tonight's event ! The Russian Military Escalation around Ukraine’s Donbas R… https://t.co/Lx1GqOUImY
about 1 hour ago
Follow

„As a founding member of Europe, France needs to fully play its part“