Inspired by our article series “Europe can do better” with the Handelsblatt, the “Budapester Zeitung” publishes a series of articles based on the speeches of the panelists, which were created within the framework of the discussion “The Future ‘Made in CEE’” organised by Network Digital and United Europe in Budapest on 31 October, 2019 (the summary can be be find here). After the speech of E.ON CEO Dr Johannes Teyssen, we continue with Hans-Paul Bürkner, Chairman of the Boston Consulting Group: 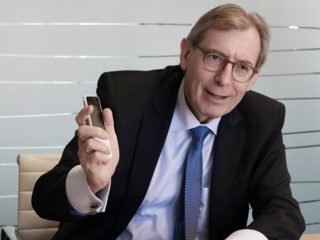 The view that digitization and machines are a big threat to employment and society at large is overly pessimistic and very dangerous. Many experts are predicting that people will become redundant and obsolete. According to an extreme forecast, up to 70% of jobs will vanish as we won’t need e.g. accountants, lorry or taxi drivers anymore in the future. Humans will be replaced by machines. At worst, some studies say, only software engineers, designers and scientists will be safe while the rest of us will be unemployed or doing low-level jobs.

Technology is not about replacing everyone with robots. Digitization and Artificial Intelligence could be harnessed for the greater good. They have enormous potential for doing good in all aspects of life and in all sectors of the economy. There is a clear need everywhere, not just in Central and Eastern Europe – in Western Europe, North America, and Japan as well to upgrade our skills in technology and not to scare people off with bleak forecasts.

In Europe, with Central and Eastern Europe no exception, and also in Asia, we have a massive demographic issue. Population is aging thus we are more likely to run out of people before we run out of jobs. New technology will help us address many of the challenges we are facing as a result of slowing population growth. We need technology to compensate for the declining number of people in the workforce – to keep up our productivity and to keep our economies growing – at least by 1-2% in the developed countries and 3-4% in Central and Eastern Europe as the region is in the process of catching up.

New technologies will also help integrate many more people into the economy, allowing them to become healthier, learn faster and be more productive. This is why we need to embrace technology as an enabler, and Artificial Intelligence, in particular, has the potential to help us solve some of the biggest challenges of all. Technology is set to enhance our capabilities thus public discourse should center not on the issue of technology versus people, but on people AND technology. It is the combination of people with technology that truly enables progress and higher productivity.

In Hungary and elsewhere in Central and Eastern Europe there is a tendency to be very self-critical. It is not bad to be critical or self-critical, but it is a mistake to say that Central and Eastern Europe is far behind in many ways, including technology. There are some very strong corporate players present in Hungary – some are Hungarians and local companies, some are the subsidiaries of foreign companies. And they are not just here because of low wages, but they are here because there are good technical skills and there is quite a lot of talent here: engineers, technicians, scientists and those make digitalization possible. You cannot implant Industry 4.0 or Artificial Intelligence if there are no people to make it work. Some of the German motor companies are here and they digitize and automate all their factories to make sure that quality is truly top notch. You cannot say “We do the smart stuff in Germany and we do the dumb stuff in Hungary.”

This is a strong foundation and if developed further and built on wisely, technology could serve as a springboard for Central and Eastern Europe. The region could use its talent base to catch up in certain fields while also to surpass the Western Europe in innovation in other fields.
The region’s importance has been increasing since it is a deeply integrated part of the European economy, and a steadily attractive target for investment. Its economic growth has been twice as fast as that of the European Union and its educated workforce is growing – it has added some 7 million graduates in the last ten years. Meanwhile, its cost advantage is forecast to persist. These factors have helped boost investment so far, but mostly in labor-intensive sectors such as manufacturing and service nearshoring. But routine jobs can be expected to be largely automated as a result of digitization. Therefore, Central and Eastern Europe needs to accelerate its digital development – it needs to grow from workshop into smart supplier.

A lot of things are happening in the area of digitalization, but there is always a lot more to do. To reach the next level, Central and Eastern Europe needs to keep up with global digitalization trends at the national level. Without suggesting that these examples could simply be emulated, let us point out some digitalization leaders such as Estonia, South Korea, the Nordics and Singapore. Accelerating the digital maturity of the economy, educating the workforce of the future to enable them to have digital skills, pushing STEM – science, technology, engineering and mathematics education, language skills, and refocusing incentives to digital investments could be measures adopted and pursued by government, corporate and social players alike to lead the region closer to becoming a smart supplier.

As the Hungarian Minister for Innovation and Technology, László Palkovics drew up at a recent conference The future “Made in CEE”, Hungary is in the process of ‘attacking’ digitalization from all fronts, ranging from developing e-government through supporting startups to fostering Industry 4.0 to mention a few. That overachieving approach is commendable and sure to generate results. Still, his ministry should not be discouraged if not all of the initiatives underway will bear fruit – just like at startups, an Agile attitude would help it to move on if one such drive slips to focus on the next one.

Companies may also risk falling victim to the need of digitalization if it is done without some strategic thinking. Fighting off the lure of some less closer-to-home and thus seemingly more attractive digitalization projects, they may need first to focus on their core activities when modernizing and digitizing. Putting their core activity in the center may be more genuine, profitable and less risky.

Last but not least, digitalization is also a massive issue for the individual. Upgrading our digital skills may be hard but it will make us stronger. It may require life-long learning since we live longer. And as people live longer, enabling them to work with machines will help ensure that they could work longer, prolonging their productive life. We need to expect to work longer, which is also good because people who work are also more open, less lonely, remain more engaged and stay healthier. So having more robots and more technology is a positive both for the people and for the companies. We may even take care of an aging society with the use of more machines and robots because finding enough caretakers is already not easy. Some people may think it terrible to have machines a part in taking care of people. Technology could be our way of making life better, but it requires people to be more open.

When governments, companies or even individuals are facing up to the push of digitization, one thing they all need to accept and possess is openness to change. As Johannes Teyssen, E.ON chairman and CEO, pointed out in this publication recently, the people of Central and Eastern Europe, due to their exposure to change over the past 30 years, are poised to embrace new things and adapt to new circumstances faster than people elsewhere. We all need to be open to change and technology and we should not be afraid of being replaced or becoming obsolete. The worst thing is to create anxieties. It is important that we do embrace the future in a positive way. Even in the specter of low growth, climate change, and digital disruption, we need to say that we can solve these problems while we all need to play our role in that. We all have a responsibility for ourselves, our families, the companies in which we operate, and the society in which we live.