“We in Europe have to invest more again. Germany in particular offers considerable scope for investment – not only in the public sector, but also for private-sector investment”, writes Christian Sewing, member of the Management Board Deutsche Bank AG, in our article series, initiated by Handelsblatt and United Europe: “There is a close correlation between the volume of investment in new technologies and the success of the resulting companies.”

It is wise to think carefully before describing anything as “fateful”, but when we look at the year ahead and what it will bring for Europe, “fateful” is just what it is – in terms of politics and in terms of the economy. Wherever we look there are sources of uncertainty. In my opinion the biggest risk is not posed by either the trade disputes or Brexit, nor by a repeat of the European debt crisis. Instead, there is one phenomenon that is ultimately at the root of all these developments: a pervasive new nationalism that is spreading throughout the US and many European countries.

It is making the world more susceptible to economic shocks. After all, as things currently stand it is very difficult to imagine a repeat of the kind of concerted political action that reined in the financial crisis of 2008. The rules-based world order – arguably the greatest political achievement of the 20th century – is now under threat. It was not perfect and it is not now – but we do at least have rules, and this world order was constantly being developed. Especially following the fall of the Berlin Wall, virtually the whole world seemed to be on an irreversible course towards greater cooperation, democracy, the market economy and freedom.

In the meantime there has been a hiatus in this trend at the very least. Important institutions such as NATO, the World Trade Organisation and the European Union (EU) are ailing and even those within their own ranks are questioning their purpose. This must be alarming for committed Europeans in particular: the new economic nationalism casts doubt on the European project, our political order and our values.

Greater integration in Europe
This means that it is particularly important now for Europe to be united in developing a shared view on freedom, democracy and economic progress. We need more European integration, not less. We must not allow ourselves to become divided. And even though it may be less popular at the moment, we should all feel proud of the European project, a peace project.

And we have to remind ourselves of what binds us together: in Europe we have the world’s second-largest single market – soon to comprise 27 countries that are home to some 450 million people. That is a tremendous achievement. This union is our only means of matching the economic and power political clout of the US and China. For me this also means that we not only have to continue developing Europe, but that we also reinvent it to a certain degree. After all our competitors are not letting up; their investments in next-generation technologies and defence appear to be far more joined-up than ours.

The EU is however poorly equipped for a reincarnation. This is largely due to its decision-making mechanisms. In a nutshell, Europe has a serious governance problem. The Parliament, Commission and Council of Ministers are often subject to very different influences. And as soon as landmark decisions are on the agenda, every Member State has a veto. It takes just one troublemaker to bring Europe to a standstill.

What will become of Europe if more and more of its elected national governments are not only Eurosceptic but are Europhobic? If more and more Europhobes are voted into the Parliament? Democracy and the division of powers must of course be absolutely non-negotiable, but the European project will only survive if Europe works better, faster and more effectively.

On the one hand, there is the much-discussed expenditure on bridges, roads and railways. However, we must also invest in education and digital infrastructure, broadband and mobile networks – and in research and development.

There is a close correlation between the volume of investment in new technologies and the success of the resulting companies. Assessing the current situation is sobering: when it comes to platform companies and artificial intelligence China and the US threaten to leave us trailing. The consequences are already grave: the most valuable companies in the world nearly all come from the tech sector. And none of them come from Europe. At the end of January 2019 not a single one of the 15 most valuable firms in the world – in terms of market capitalisation – was European. Nestlé was the highest ranked European company in 16th place.

And not only that: we Europeans are only invested in the world’s biggest companies to a tiny extent. We don’t even own two percent of these firms.

While our trade surplus is regularly a topic of conversation and we Germans are even reproached because of this, experts estimate Germany’s annual “digital trade deficit” is already some 30 billion euros – and rising fast.

The course is currently being set here – the course in a world where artificial intelligence, data and digital infrastructure are among the factors that decide whether entire economies succeed or fail. And about what shapes our society. The average German surfs the internet for around four and a half hours every day, while young people spend a great deal longer online. Google guides us along roads, Amazon influences what we decide to buy and where. Algorithms that dictate an increasing large part of our daily lives are hosted in distant lands. We are losing “the sovereignty over the truth”, as the venture capitalist Klaus Hommels so aptly put it.

Are we prepared to settle for that? Or shouldn’t we do our utmost to populate as many areas of the economy as possible with our own digital platforms?

We must understand, though, what an enormous effort this will require from us. Whether it’s Facebook, Amazon or Google: all the big platforms initially received billions in investment and investors accepted many years of lossmaking. Once a platform has finally prevailed, though, it grows extremely fast, possibly – as we see it – to even become one of the global oligopolists.

So we must act and invest faster. This is not just the job of the public sector; we corporates also need to do more – purely out of self-interest. Otherwise we will gamble away our future. Europe would have to release greater financial resources for this purpose. Insurers and pension funds, for example, should be permitted to take on more risk in order to invest in companies and growth technologies – as is the case in the US.

Strong banks in Europe
We at Deutsche Bank also have an obligation to play our part in raising and allocating capital for investment. We have already made huge investments in platforms – not only alone but also together with other firms. A strong Europe needs strong banks. They play a crucial part in a strong and healthy economy. In this respect, the initiation of Banking Union in Europe is a major success. It is not complete, however, and progress must be made towards supplementing it with a capital markets union.

It is simply unacceptable that an international investor wishing to buy bonds issued in Spain, France or Germany has to scrutinise three completely different sets of securities and insolvency rules. We need a genuine single market for financial services.

Fragmentation makes it hard for European banks to develop the strength needed at home in order to keep pace with major banks in the US and rapidly growing banks in Asia. The question is: do we really want to make ourselves largely dependent on foreign countries for capital and financing over the long term? It must not come to this. The result would be a long-term shortage of capital and funding options, as well as ignorance of the latest developments in the global capital markets.

We should not forget how quickly many foreign banks pulled out during the 2008 financial crisis, while domestic banks largely continued lending. However, it is not just a question of crisis situations, rather of the fundamental infrastructure of Germany and of Europe.

We face a year of change. The geopolitical environment has become tougher and economic pressure is mounting. At the same time new faces will be appointed to key positions in Europe this year: the European Commission, European Council and European Central Bank will see their presidents replaced. And last but not least European voters will elect a new parliament.

So it is a fateful year politically speaking, too. We all have an important part to play: to make sure that this year marks the start of a renaissance for the European project – and not the beginning of its end.

About Christian Sewing:
Christian Sewing, born in 1970, has been a member of the Management Board since January 1, 2015. He has been Chief Executive Officer since April 2018.
He joined Deutsche Bank in 1989. From January until June 2015, he was responsible on the Management Board for Legal, Incident Management Group and Group Audit, and assumed responsibility for Deutsche Bank’s Private & Commercial Bank (including Postbank) between July 2015 and April 2018. He was Head of Group Audit from June 2013 to December 2014, prior to which he held a number of management positions in Risk. From 2012 to 2013, he was Deputy Chief Risk Officer. From 2010 to 2012, he served as the Bank’s Chief Credit Officer. He has worked in Frankfurt, London, Singapore, Tokyo and Toronto. From 2005 until 2007, Christian Sewing was a member of the Management Board of Deutsche Genossenschafts-Hypothekenbank. Before graduating with a diploma from the Bankakademie Bielefeld and Hamburg, Christian Sewing completed a bank apprenticeship at Deutsche Bank in 1989. 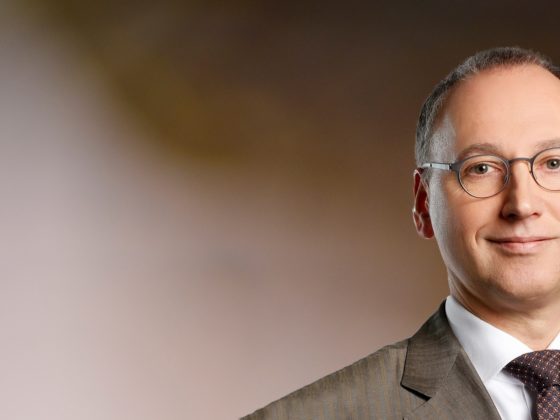 Werner Baumann: We need a culture of opportunity

Martin Brudermüller: What‘s the matter with Europe? We need a new Europe of ideas!