In the context of the socio-political Lohmann seminar on January 13th, members of the Mining and metallurgical association in Aachen discussed the topic “European Identity“, United Europe’s theme of the year 2018. 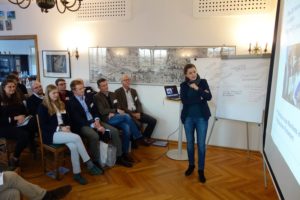 Jenny Paul, former managing director of United Europe, was also invited to present the Rome Manifesto and to discuss the reform proposals for Europe with the participants.

Early in the morning, the approximately 40 participants of the intergenerational seminar from all parts of Germany and Austria came together to talk about the central topic in intensive group discussions from different perspectives. The mixture of predominantly 18 to 28-year-old students and participants from older generations was particularly exciting and led to interesting conversations – through different life experiences, perspectives and attitudes. The ideas of the Rome Manifesto, presented in the afternoon by Jenny Paul, stimulated the seminar participants to further detailed discussions.

In the end, the participants agreed that it is now up to everyone of us to move Europe forward and that we cannot wait for the political debate to start on its own. Jenny Paul called on the participants to push ahead with the hope of a better Europe in 2018 and to continue discussing Europe after the seminar. 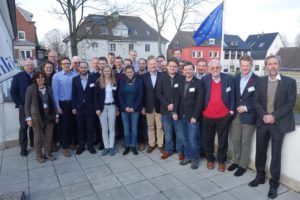 An exciting day full of interesting debates and new ideas for Europe ended with a joint dinner, which the student organisers of the BuH association had put together on their own. We would like to thank United Europe member Tim Radmacher, one of the organizers of the seminar, for the invitation and congratulate him on a successful seminar! And at the end of what was probably an unusually sunny day for Aachen, the yellow stars of the club’s European flag waved in the garden perhaps a little stronger than before.

We are looking forward to further initiatives of this kind, and are always available to answer questions or discuss possible collaborations ()!

„The EU represents itself as a peaceful resolver of conflicts and platform for continent-wide development. These are its best export products and worth both the effort and cost of maintenance.“

Antti Herlin
Chairman of the Board KONE Corporation