The latest study of eupinions has found out that 44 percent of Europeans see globalization as a threat rather than an opportunity. In addition, fear of globalization is one of the main drivers for the election of populist parties.

But what does that mean for European integration? Ar 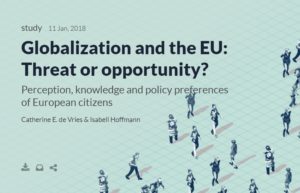 e Europeans similarly concerned about this and does it have similar effects on party preferences? The current eupinions study shows: No. The Europeans who see globalization as an opportunity are also positive about European integration. However, those who fear globalization are divided: 45% want more political and economic integration, 41% of them want less integration.

“For many Europeans who see globalization as a threat, the EU is part of the solution”, underlines the authors Catherine E. de Vries and Isabell Hoffmann. “These people tend to turn to left-wing parties. Supporters of right-wing populist parties, on the other hand, overwhelmingly reject both globalisation and European integration. They also say that they are much more likely than others to have personal negative experiences with globalization.” The complete study can be found here.

Eupinions is an independent platform for European opinion research and a Bertelsmann Foundation project.

„...this beautiful colorfulness of Europe, this diversity that is tolerant and open to the world“