Daniela Schwarzer, member of the United Europe board and Research Director of the German Council on Foreign Relations (DGAP), about the foreign policy effects of the German federal elections:

While Germany’s center has held, its policy consensus is about to be tested. With the far-right AfD party in the Bundestag, the German public will be exposed to more radical positions on foreign affairs than have been heard in the country in over a generation.

BERLIN – The outcome of Germany’s federal election holds a crucial lesson for the European Union: even the country that has been the EU’s bedrock of stability amid crisis is not immune to political fragmentation and polarization. Although Chancellor Angela Merkel will almost certainly gain a fourth term, her new government is likely to be considerably weaker than the three that preceded it.

The Bundestag now counts six factions, compared to four in the previous electoral term. Merkel’s center-right Christian Democratic Union took 33% of the vote, its worst result since 1949, though still enough to give the CDU the most seats in parliament. The center-left Social Democrats (SPD) – Germany’s second-largest political party, and a part of Merkel’s last governing coalition – also hit a post-war low, receiving just 20.5% of the vote.

Meanwhile, the populist Alternative für Deutschland (AfD) won 12.6%, making this anti-euro, pro-Russia, and staunchly xenophobic party the first far-right party to enter the Bundestag in almost 60 years. And the SPD has thrown in the towel, vowing to spend the coming electoral term in opposition.

In this context, Germany is likely to be ruled by a so-called Jamaica coalition, named for the colors of the parties – the CDU, the Greens, and the Free Democrats (FDP) – that would comprise it. But such a coalition will be unruly, owing to the parties’ heterogeneous foreign-policy positions.

Similarly, the SPD-led opposition will be beset by deep divisions. Indeed, it is unlikely to cooperate on any issue at all with its fellow opposition party, the AfD. The SPD shares almost no values with the AfD, which has already declared that its main goal will be to hound the other parties with populist and nationalist bombast. As a result, decades-old parliamentary norms of decorum and collegiality are in jeopardy.

Given the Bundestag’s central role in shaping Germany’s EU policy, this could weaken the capacity of Merkel’s government to provide the kind of leadership Europe now needs.

To be sure, there is some good news. The victory of Merkel’s CDU, however weak, implies elements of continuity on which to build. Merkel’s prompt decision to take responsibility for forming a viable coalition government means that her commitment to preserving the EU and her staunch defense of democracy and Western values will continue to guide German policymaking. Moderation, stability, and international openness will remain Germany’s watchwords, no matter how much ugly rhetoric the AfD spews.

But, in terms of action on international challenges, Germany’s partners will have to be patient. In particular, though Merkel is expected to cooperate closely with France’s pro-European president, Emmanuel Macron, to forge a new model of EU integration for the post-Brexit age, she is unlikely to do so right away.

The formation of a coalition alone – in particular, a conservative-liberal-green coalition – will likely take months. Next month’s state election in Lower Saxony, where the AfD secured significant support, adds another element of uncertainty to the mix.

Even after that election, compromise may not come easily. The Bavaria-based Christian Social Union (CSU) – the CDU’s sister party – will face a state election next autumn. Feeling the hot breath of the AfD on its neck, the CSU has already sharpened its criticism of Merkel’s immigration policy, and is likely to try to push the chancellor further to the right in the coming year.

Perhaps the stickiest issue for the coalition parties will be the eurozone. The stances of the FDP and the Greens are opposed on this front, particularly when it comes to joint crisis management, mutual insurance mechanisms, and fiscal tools. But this struggle to find common ground may prove useful for the wider EU, as its leaders attempt to strike a balance between the responsibility of member governments and the eurozone-wide institutions that the monetary union needs to function effectively.

It may turn out to be easier for Germany’s coalition parties – not to mention the French and German governments – to forge a new framework for bilateral and European security cooperation. Polls show that concerns about terrorism and internal security outweigh fears over immigration. If those pressing issues are addressed at the European level, as Merkel suggested in her victory statement, support for Europe could end up winning back the discontented voters who cast their ballots for the AfD.

Whatever government emerges in Germany in the weeks ahead, its leaders will need to devote more effort to explaining their policy choices to citizens and international partners alike. With the AfD in the Bundestag, the German public will be exposed to more radical positions on foreign affairs – from EU leadership to relations with Russia – than have been heard in over a generation. While Germany’s center has held, its consensus is about to be tested.

Daniela Schwarzer is Research Director of the German Council on Foreign Relations (DGAP). She is also a member of United Europe.

Here’s the link to the original article, published first by Project Syndicate. 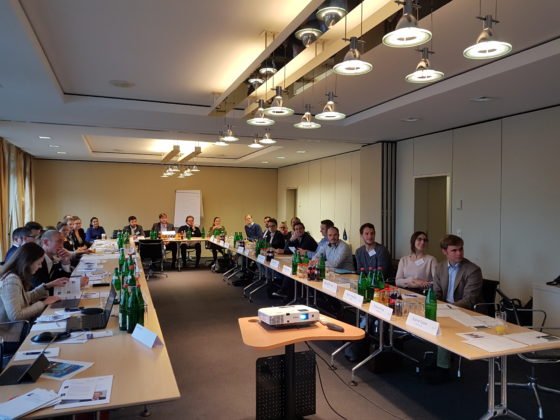 The Populist Challenge: Conclusions of the YPS Hamburg