I first started campaigning for the Democrats Abroad in the UK in July 2015 as I knew that a Hillary Clinton presidential run was on the horizon. Since then I’ve been back and forth from the United States with the primary and presidential campaign teams in New Hampshire. I also joined Britain Stronger In Europe, the UK referendum campaign to remain in the European Union.

As part of the ground team on these campaigns, we recruited hundreds of volunteers and sent them out canvassing on doorsteps, making phone calls to voters and distributing literature at high profile events. These volunteers spent thousands of hours doing their best to push what turned out to be distorted and unfocussed campaign messages, whilst an air war raged through news, social media and television.

I am writing this piece because I saw first-hand how the passion and commitment of those volunteers was wasted because of the fundamental errors of those in charge of the Remain and the Clinton campaigns. I would like to offer some small lessons from these disasters drawn from my own experience on the front line.

The core of a campaign message is the feeling inspired in voters by its name and strapline (i.e. main slogan). I couldn’t even tell you what the Remain camp’s strapline was. We were called Britain Stronger In Europe, which, in addition to being a mouthful, didn’t capitalise on the two most necessary words for this campaign: ‘vote’ and ‘remain’. In contrast, consider Vote Leave: the campaign name tells you exactly what it wants you to do.

The garbled Remain camp message, in contrast to the simplicity of Vote Leave, cost us votes. I think we took it for granted that voters would be on our side. Our campaign message – or lack thereof – would simply not matter.

When the referendum date was announced, our ground team was kept waiting for months before we received new literature with the voting date on it. About six weeks before the vote, the voice of the campaign had finally shifted to ‘vote remain on June 23rd’, but it was too late. Again, the Remain camp took for granted that voters knew the date, that they were on our side, that they were ready to vote. It was this complacency which made us fail.

The Clinton camp’s ‘Stronger Together’ could not match Trump’s ‘Make America Great Again’. Most people didn’t even know Clinton’s strapline. She aimed to inspire a lucid vision of social unity but did nothing to address the economy, healthcare, immigration and education. Again, it was taken for granted that voters would stick by Clinton even though they knew nothing about what she aimed to do.

‘Make America Great Again’ is an extremely powerful set of words. It is possible that in the early days, even the staff on the Trump campaign didn’t quite know what they had harnessed. The choice of words links an action with a reference to time, much like ‘Vote Leave on June 23rd’. ‘Make America Great Again’ has almost as much force as ‘We Can Do It!’, the Second World War propaganda aimed at recruiting women to the war effort.

Throughout the campaigns we listened to countless debates, speeches and rallies, we read blogs, news, ads and tweets by the hundreds. From this, I deduced the following: the Remain camp talked about Vote Leave and its lies, while Vote Leave promoted its lies. Clinton talked about Trump, while Trump promoted Trump.

I expected day after day that the campaigns would change their focus, disregard the opposition and actually steer the conversation in their favour. They never did. Clinton kept talking about how dangerous Trump was. She failed to communicate her own policies and ideas, in particular towards the end of the campaign.

In Britain, the Remain camp should have started out by deciding on one or two strong policy points. But it became distracted trying to debunk Vote Leave’s NHS and immigration myths instead of pushing forward the UK’s reformed relationship with the EU or the 70 years of post-war peace.

Vote Leave and Trump could not have had it easier. As long as the other side continued to be distracted and unfocussed, they could steer and control the public debate in their favour.

Rigorous message discipline is about using the same words over and over again. It resonates with voters and etches the campaign message in their minds. Michael Gove, in one of his Brexit broadcasts, tacked on ‘vote leave and let’s take back control’ at the end of every sentence. This message was reflected in every piece of literature produced by Vote Leave.

David Cameron did the same with ‘Britain is stronger, safer and better off in Europe.’ Yet the message was lost as the literature had no cohesion. It only sometimes appeared in print and was not linked with any clear call to action to vote remain.

Curiously, Trump also lacked message discipline. He didn’t say ‘Make America Great Again’ at every opportunity. During the third presidential debate (possibly one of the most important broadcasts) there were only two instances, in his opening and closing statements, where he reinforced this message.

Clinton attempted to include her message – ‘Stronger Together’ – in speeches, but I do not recall hearing it during the final debate. Worse, her campaign tried to take hold of Trump’s message ‘Make America Great Again’ and give it a different spin. Clinton’s rallies started to include phrases like ‘America is already great’ and ‘we are great because we are good’. Although true, these phrases diverted the message completely from ‘Stronger Together’ and provided additional airtime to Trump and his message.

In August 2016, after Cambridge Analytica announced they would be working for Trump, I went online to check out the two candidates’ websites. First the Republicans: There, visitors were greeted by Trump’s face and his strapline ‘Make America Great Again’. A banner across the top of the page said ‘click here to vote for Trump’. The link sent you to the GOP website to register to vote in your state or vote absentee.

Then I visited Clinton’s site and was greeted, to my surprise, by Trump’s face, with a banner that said ‘click here to donate’. There were many moments when I knew Clinton was going to lose, and this was one of them.

A campaign website is one place where you can speak to voters and supporters directly. Unlike mass advertising, you know a visitor to your website is likely to vote in your favour. As she had a well-financed campaign, Clinton didn’t really need her voters’ money. The ‘click to donate’ came across as needy. However, she did need every visitor’s vote, but didn’t ask for it on her homepage. And instead of pushing a message of economic prosperity or social inclusion, she pushed the dangers of Trump, leaving little room for vision and inspiration.

This experience leaves me with a burning question for Robby Mook and John Podesta: did you ever go to Donald Trump’s website? Did you ever think of sticking a ‘click to vote’ button on hillaryclinton.com?

As a keen participant in the post-election dialogue, I hear this question a lot. The rise of extreme nationalism and the surge in racism, misogyny and selfishness has unsettled large numbers of people, and they are asking where this came from.

I believe the answer is simple: it was always there, but it lacked a voice. Extremist groups had leaders but no leadership, no voice in governments and no power. Their supporters had no power, and as tolerance slowly gained ground, they learned to moderate their extremism.

People like Donald Trump and Nigel Farage have suddenly legitimised extremism and given it a voice. People who are xenophobic could finally vote for a person and a cause they believed in. There was no sudden surge in racist opinion or a shift in public morality; extremist people always been around. Yet they had no voice until this new leadership surfaced. In my opinion, there should be the heaviest sanctions for people like Donald Trump and Nigel Farage who give legitimacy to extremism.

The country’s moral centre has not changed, and fundamentally we are the same people we were six months ago. What is different is whose voice is loudest.

2017 and beyond: listening to voters

In the UK, it is common practice to write to your Member of Parliament if you have a problem in your local area, and it is the MP’s responsibility to respond. The tradition of MPs representing constituents reaches back centuries, preserving generations of dialogue between the electorate and their elected representative. Campaigners have to finally start listening to the electorate and respond soundly.

As is well documented, Robby Mook failed to listen when the organising teams in Michigan and Wisconsin desperately begged him to shift strategy and rescue a vote that was slipping away. The organising teams were in touch with voters and they knew they were losing, but were unable to execute strategies to save Clinton’s campaign.

Similarly, the Remain camp staff kept telling us everything would be fine if we followed the plan. On the ground, we knew better. We were desperate for a strong, centrist message on immigration that could convince sceptical voters. Even in a place as diverse as West London, Leave voters wanted to talk about immigration. We never had a decent response.

There was constant talk of a ‘targeted, data driven campaign’ from Will Straw and Robby Mook, but the data were never fed into messaging, advertising or speeches. At the same time, the quantum physicists (no lie) at Cambridge Analytica liberally used data for advertising and messaging. They managed to talk to voters in their own language to bring them on board.

Campaigns are almost uniquely about communications, and where campaigners failed to listen to voters, voters retaliated by not listening to campaigners and voting elsewhere.

In my opinion, it is about time for progressive people to play hardball with the opposition and beat them at their own game.

I believe as strongly as ever that I supported the right campaigns and the right candidates. Even though I knew we would lose, I still believed we could win. Belief is powerful and all-encompassing, and it overrides reason. Trump voters believed Trump’s rhetoric yet were later caught on camera admitting it could not be true. Some Leave voters believed that immigration cost them their jobs, but would not own up to their own lack of skills or reliance on the state. I believed that our electorate would turn out to vote down instability and extremism while I knew our campaigns were losing. Belief helps people make the unreasonable, reasonable.

Today, I know we deserve better. I want to inspire voters to believe that they, too, deserve better than what we are about to face in 2017.

Disclaimer: I write as a private citizen, not as an official voice of any campaign. 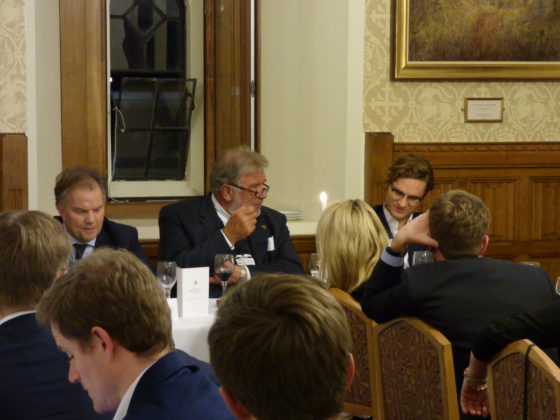 “A Devilish Readiness to Risk Everything”

The Rome Manifesto: Proposals by the Next Generation