At our latest alumni gathering in Berlin on July 6th, we met with young professionals and friends to discuss Brexit, referendums in general, the wide-spread lack of belief in the European project, and how to reconnect Europe to its citizens. With individuals from six countries around the table, Europe was very much alive in the room from the outset.

Meeting without a formal agenda, the group very quickly got into a lively discussion with Brexit being the overarching topic of the evening.

Justus Scheder, a Berlin based surgeon, argued that the main issue is a growing age disparity in Europe. Today, most voters are older ‘baby-boomers’ whose interests are very different from those of young people. Arguing that the young will have to finance the old without any hope of every achieving the same kind of prosperity contributes to the disillusion many young Europeans feel, especially in the time of high unemployment rates. With politicians of all parties mainly acting to please the old, voting could quickly appear pointless to many young Europeans.

“If you exit something as great as Europe, it shows that something is really wrong, ” said one Greek participant. In a fascinating comparison of Brexit to the Greek referendum and almost ‘Grexit’ of 2015, he argued that disillusioned citizens are not acting in a rational (or sober) way, but drunk on nationalism. In Greece, a complete breakdown was avoided, but the example of his country should be seen as a warning of how crises can escalate at incredible speed.

The group agreed that Europe needed better leadership. A young German entrepreneur compared countries to companies and argued that each country would need to find its competitive advantage in order to be successful in the age of globalisation.

The host of the meeting, Cindy Tereba, argued that digitalisation and the ever faster movement of information were a game changer. Not only was it becoming harder for people to actually stay informed in an in-depth way, but the speed of things was also putting strains on society, the economy and our democratic systems. Many European citizens in their search for security were falling prey to a misguided, nationalistic nostalgia. Quoting Aristotle, one participant asked whether over time we may have lost our way and have moved from ‘good democracy’ to ‘bad democracy’. Yet, as one young Luxembourg participant reminded everyone, European integration has made it possible for us to live in peace for more than 70 years. We should do everything we can to make sure Europeans regain awareness of – and pride in – this incredible achievement.

The second Berlin alumni evening ended with a discussion about Berlin. From a disenchanted and unwanted city in the 1990s, Berlin transformed itself into a hip home for creative start-ups and young entrepreneurs. Maybe Europe as a whole can take some hope from this example. After all, the group concluded, what is needed most is believing in yourself and a bright future ahead.

Our thanks goes to Cindy and Christian for hosting this wonderful evening and to Justus for his help in arranging it. The Berlin alumni will meet again at the beginning of October. If you too would like to participate or arrange a similar event in your city, please contact us at events@united-europe.eu We look forward to hearing from you!

Size matters, and geography too: the (un)fortunate case of Ukraine

Kristina Radovic: How can the EU meet the new internal and external challenges?

It is time to call attention to Europe’s security

Benedikt Köhler: How can the EU meet the new internal and external challenges?

Julien Hoez: Boris Johnson is unravelling before our eyes 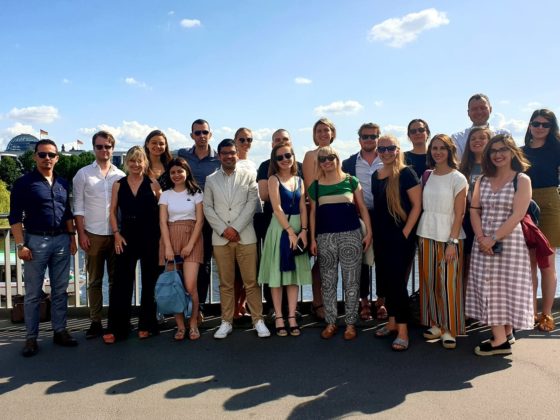 More from the Alumni Network

RT @eucopresident: Tonight will be an opportunity to reconfirm the European perspective for our Western Balkans partners. We must deepen…
2 days ago
Follow