Europe is watching with bewilderment the inflow of refugees and immigrants through its borders, and the human tragedies that inevitably accompany such treks. Just as bewildering is why Europe has been so unprepared. This migration was predictable. It has long been obvious that millions of people would soon be pouring in.

This mass south-to-north migration is epochal, more important than Europe’s debt crisis or the smouldering conflict in Ukraine. It has powerful underlying causes and the dangers and opportunities it brings are many.

Europe has a falling birth rate and an ageing population. Even in a protracted economic crisis, the European Union is an island of prosperity, security and stability compared with the rest of the world. Conditions in Europe’s closest neighbours – Africa and the Middle East – are just the reverse. These countries are overpopulated and have young populations. Their economic growth is too slow to reduce massive unemployment, and many are ravaged by conflicts and civil wars.

Even in good times, these differences produce an osmosis-like seepage of migrants across the EU’s borders. When conditions in Africa and the Middle East worsen, massive migration waves form, as they are doing now. This process will probably bring many millions of people to Europe over the next 10 or 20 years.

In Northern Africa and the Middle East, large parts of the population are determined to leave their homes and seek a better life in Europe. This is bound to happen and nothing can stop it. The Middle East, Egypt and Africa are all different cases, however.

In the Middle East, people are fleeing war zones, especially in Syria and Iraq. They will continue to do so until it dawns on the international community that, (a) these two states are made up of incompatible parts that have been held together by force; and (b) Iraq is a sham democracy that will always oppress its minorities. Civil wars are inevitable under these conditions.

The attempt by the Islamic State terrorist group to create a caliphate in Northern Syria and Iraq must be countered militarily. But more will be needed for the area to cease being a fertile ground for conflict. Bombing Islamic State’s positions will not bring peace.

Tales of shadow networks financing terrorists and allegations made in the West against Saudi Arabia and the Gulf States are mere ruses to divert attention from a fundamental problem. This is the weakness of the states created in the Middle East by the Western powers, mostly France and Great Britain, following World War I. The artificial geopolitical structure installed at the San Remo conference (1920) has ceased to function. Maintaining the status quo in the region is no longer possible.

Millions of refugees from Syria and Iraq are already in camps in Turkey, Jordan and Lebanon. Many of them are well educated and have skills that Europe needs. 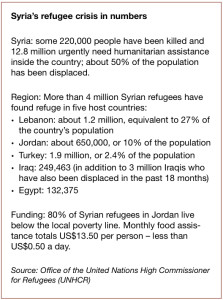 Egypt has nearly 100 million inhabitants. Most of that population is young, with few prospects of employment at home. The country may look large on the map, but it comprises mostly desert with only a narrow strip of arable land along the Nile. The only reason that a mass migration has not started to Europe and Saudi Arabia is that Egypt’s present leader, President Abdul Fattah al- Sisi, has managed to restore a degree of political stability in the country.

On top of its own economic and demographic problems, Egypt hosts a significant number of refugees and immigrants. In the summer of 2015, the United Nations Refugee Agency registered some 133,000 Syrian refugees and 70,000 more from other countries in Egypt. The non-Syrian refugees are mostly Sudanese, South Sudanese, Somalis, Eritreans, Ethiopians and Iraqis.

Besides Egypt, the bulk of the human river can be expected to flow to Europe from the Saharan and sub- Saharan countries. The Sahel is hugely overpopulated, its economic and political circumstances are catastrophic and the natural living conditions marginal. The migrants from this region are overwhelmingly young men seeking jobs and income, not entire families.

Refugees from the Middle East and Afghanistan are for the most part fleeing war, repression and killing. Africans mostly emigrate for economic reasons, although there are plenty of wars and repression, too. It should also be remembered that in an environment as harsh as the Sahel, economic emigration can be a question of physical survival.

The Syrian exodus is already peaking, immigration from Egypt will come later, while migration from the rest of Africa is a long-term trend. Smart policies by the EU, especially working directly with the African states, may help limit this inflow and perhaps even stop it in the long run. Over the next decade, however, Europe must be prepared to absorb millions. The sheer size of these movements makes them impossible to stop.

Europe’s policy should include military engagement to help restore peace in the Middle East. More attempts should also be made by the West to help African states improve living conditions there. To succeed in such endeavours, however, the Europeans and other foreigners must acquire a better understanding of African traditions, politics and cultural conditions.

At the moment, there is no escaping the fact that Europe must be ready to cope with about 1 million immigrants from the South each year. This equals only 0.2 per cent of the EU’s population. And if the inflow doubles to 2 million, that would still represent a mere 0.4 per cent of that population.

Europe needs immigrants to compensate for its negative birth rate. Not only will highly qualified immigrants help; there are unskilled jobs to fill as well.

It is true that Europe suffers from high unemployment at the moment, especially in the South. In EU countries such as Greece, Italy and Spain, this is combined with youth unemployment rates above 40 or even 50 per cent. But joblessness on this scale is the effect of failed structural policies, which have distorted labour markets with wrong incentives. Exaggerated job protection by antiquated work rules and rigid legal codes make it virtually impossible to lay off employees. This discourages investment and hiring.

Another result of failed structural policies is that people are forced to take jobs for which they are overqualified. This widespread phenomenon of under-employment shows that there is actually a need for less skilled workers.

With its falling birth rate, Europe will soon not have enough young people to sustain its prosperity and provide services to an ageing population. The masses needed to plug this demographic gap are coming from the south and beating on the EU’s door.

This is where the problems start. Amazingly, the EU is not prepared to deal with these new arrivals. Their numbers are too high to be stopped at the borders, so governments have resorted to putting them in camps. But then what? Deporting people back to war zones is not really an option. And even when that is done, they come back.

The best choice by far would be to integrate the newcomers and put them to work as quickly as possible. This requires wholesale changes in Europe’s restrictive labour codes. It also means crash programmes in remedial education, languages and occupational skills must be organised so immigrants can take the jobs that become available.

Cultural and religious concerns related to mass immigration, evident in many European countries, are legitimate and must be addressed in a forthright way. Integration of the newcomers must be contingent on their respect for European culture and its roots in the Christian tradition. No concessions ought to be made in this area.

There are also terrorism-related fears. This is a risk Europe faces no matter what it does about immigration. There is no question that immigrants need to be registered and screened. This process would be simpler if immigration proceeds in an orderly fashion, rather than as a massive lunge across the border. But people who can hold jobs and find a future here are less likely to be recruited by terrorists.

A good place to start the registration procedure would be in the immigrants’ countries of origin. This way the entire relocation process could be civilised and the criminal business of smuggling people could be largely eliminated. A tricky, if short-term problem arises from the fact that the African immigrants are almost all men.

Europe is at a crossroads and decisions need to be made. One can only hope that the procedures established for

managing this human flow will not be too bureaucratic and cumbersome. That could easily happen if fear-mongers and sceptics get the upper hand. Sceptics focus on problems, not solutions.

The challenges associated with mass immigration need to be analysed and practical solutions crafted. The police and justice systems, for one, need to be able to react immediately to criminal behaviour. Prompt deportation of the guilty cannot be an empty threat.

History shows that immigrants bring medium and long- term benefits to their host countries. Building protective walls, on the other hand, only leads to driving migration underground, benefiting organised gangs of smugglers. The multitudes that manage to make it to Europe illegally will either be kept idle in camps, at public expense, or find work in the shadow economy.

If this migration is an irreversible historical process, Europe at least has the opportunity to reap its benefits. To do so, the EU must be ready to make the necessary adjustments to increase flexibility and mobility within its labour market, allowing immigrants to go wherever work is available. These steps would also go a long way towards easing the existing joblessness and under-employment in most EU countries. More people at work means more economic growth.

The more probable, less efficient scenario is to keep improvising. Politicians will continue to discuss ‘quotas’ for accepting immigrants that are always too little, too late. The border countries being overwhelmed by immigrant inflows – Hungary, Italy, Spain and Greece – will keep twisting the arms of non-border countries to accept more people. National debates on integration versus repatriation will ramble on and Europe will continue its blame game, perhaps finding new villains besides Hungary.

It is not very probable that disagreements over immigration will destroy the EU. However, unless its leaders rise to the challenge, much political and social energy will be wasted, needless schemes will be expensively funded, and satisfactory solutions will be delayed.

As refugees and immigrants are kept idling in camps and improvised shelters, national politics in the EU member countries will radicalise. Mass immigration will only accelerate the widespread popular disillusionment with Europe’s mainstream political parties.

Normally, the pros and cons of a fundamental policy shift need to be carefully weighed, and discussion works well for democracies. In this case, however, mass migration from the Middle East and Africa is happening whether we accept it or not. The only dilemma now is how to cope with the inflow. Europe’s eyes have been shut long enough.

The best choice by far would be to integrate the new- comers and put them to work as quickly as possible. This requires wholesale changes in Europe’s restrictive labour codes. It also means crash programmes in remedial education, languages and occupational skills must be organised.

(This report is an expanded and updated version of an article published in Neue Zürcher Zeitung on September 11, 2015).

This report has been written by Prince Michael of Liechtenstein and made available to our members through the courtesy of ©  Geopolitical Information Service AG, Vaduz:
www.geopolitical-info.com