How to stabilise and reform Ukraine’s economy: In a study drawn up for the non-profit association United Europe, the Vienna Institute for International Economic Studies (wiiw) shows what the European Union can do to help this country out of its deep crisis. 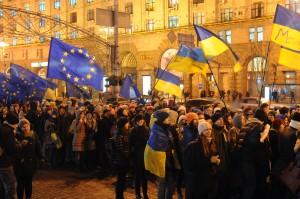 Nearly a quarter century after the break-up of the Soviet Union, Ukraine’s economy is in terrible shape. GDP per capita is only 65% of what it was in 1991, and the situation is likely to get worse, as the Vienna Institute for International Economic Studies (wiiw) shows in its new study “How to Stabilise the Economy of Ukraine”. In 2015, the military conflict, galloping inflation and the collapse of trade and investment will plunge Ukraine’s economy into deep recession for the second year running.

Economic stabilisation and a return to sustainable and inclusive economic growth will be impossible without a resolution of the military conflict. Restoration of normal economic activities in the affected territories will also require massive public investment. According to wiiw, the EU could play a crucial role here. “Ideally, the EU would design a ‘Marshall Plan’ for Ukraine which would include financial aid, institutional reform and help to foster economic restructuring, trade and investment”, said Peter Havlik, one of the authors of the study.

The West also needs to be sensitive towards the social impact of the stabilisation policies currently implemented in Ukraine as part of the IMF-led programme. The impact of such policies on ordinary Ukrainian citizens should be carefully considered so as not to erode the necessary reform support.

Given the deep economic division of Ukraine, economic stabilisation will not be possible without bolstering Ukraine’s trade both with the EU and with Russia. Despite the recent downturn, Russia is still Ukraine’s single most important trading partner. Trade disruptions with Russia affect above all Ukraine’s machine-building sector located mostly in the eastern part of the country. Annual losses for Ukraine from the break-up of economic relations with Russia are estimated at USD 33 billion.
Under the crucial assumption that peace is restored, wiiw has drawn up policy recommendations for Ukraine’s European partner and the international community at large in four main areas to help put Ukraine on the path to sustainable, long-term growth:

“Under the current conditions, Ukraine’s economic outlook is bleak,” said the study’s co-author Michael Landesmann. “But we could see a marked improvement in growth and living conditions over the next five years if the EU helps Ukraine push through some of the reform steps we propose.”