Potsdam-based M100 Sanssouci Colloquium, which is partnering by United Europe this year, is pleased to announce Dr. Wolfgang Schäuble (President of the German Bundestag) as political keynote speaker for the upcoming M100 Media Award ceremony on 17 September 2019.

“From Pipedream to Reality – Democracy and the European Public Sphere” is the title of this year’s M100 Sanssouci Colloquium, inviting international thought leaders from the realms of media, politics, and academia to discuss the future of the European public sphere.

Dr. Wolfgang Schäuble, a dedicated proponent of Europe, has been involved in numerous important European decisions over the course of almost 50 years in politics. He believes communication is a vital ingredient of political opinion-forming processes within democracies.

In order for Europe to move forwards “we must ensure a common communication space and debate openly”, Schäuble said. “This cannot be achieved without a common European public sphere and a culture of listening. To this extent, the crises of recent years have also had a positive side effect: Europe has long ceased to be an issue guaranteed to turn readers off, to ‘kill’ circulation. Disputes over the euro, refugee policy, Brexit, the EU’s ‘crisis mode’ – all of these are issues which politicise people, polarise opinion and are relevant. Yet a European public sphere is, at best, in its infancy. So this is a major task for all of us – in politics, society and the media. The international media conference in Potsdam provides an excellent platform for discourse on this task.”

Launched in 2005, the M100 Media Award has been presented to personalities who have left their mark on Europe and the world and have provided outstanding service to strengthening democracy and freedom of the press as well as outstanding achievements in promoting European understanding and communication. Previous laureates include Lord Norman Foster, Dr. Bernard Kouchner, Bob Geldof, Ingrid Betancourt, Hans-Dietrich Genscher, Kurt Westergaard, Charlie Hebdo, Roberto Saviano, Natalia Sindeeva and Deniz Yücel.
This year’s laureate will be announced in due course.

The participants will be welcomed by the Minister President of Brandenburg Dr. Dietmar Woidke.
The opening speech will be held by the award-winning US-American sociologist and globalization theorist Prof. Saskia Sassen.
The welcoming speech for the ceremony of the M100 Media Award in the evening will be held by the Lord Mayor of Potsdam Mike Schubert.

M100 will also host the M100 Young European Journalists Workshop in the run-up to the conference and the award ceremony. 25 young journalists from Europe, the countries of the Eastern Partnership and Russia will be invited to Potsdam and Berlin for an intensive nine-day training on “Reading in the Digital Age – Innovative Journalism”, culminating in participation in the M100 Sanssouci Colloquium.

M100 is an initiative of Potsdam Media International e.V. and is mainly financed by the State Capital of Potsdam. Other supporters include the Federal Foreign Office, medienboard Berlin-Brandenburg, Federal Press Office, Friedrich Naumann Foundation, the National Endowment for Democracy, and United Europe e.V. Cooperation partners include the Stiftung Preußische Schlösser und Gärten, Reporters without Borders and the Verband Deutscher Zeitschriftenverleger (VDZ).

For more information please visit the website of the event here. 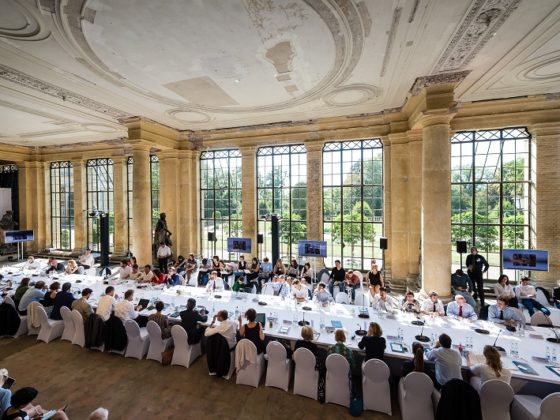