Let’s talk about Europe. You’d rather not? You’re not against Europe, just tired of it? That doesn’t surprise me. You’ve developed an acute allergy to political sermons and calls to rally around the European flag? Me too. You don’t want to hear anything more about quotas, product bans, and emission thresholds? I can readily understand. You’ve stopped following every minor skirmish in the War of the Roses between the EU and the UK? Who hasn’t.

And yet: we have to talk about Europe. Because, whether we like it or not, Europe remains our only opportunity to hold our own in the complex and challenging world of the twenty-first century. The desire for a small, manageable, and secure homeland is understandable. But the truth is: that alone won’t ensure us a good future. We have to talk about Europe because Europe’s future is more uncertain than many think. In losing the UK, Europe is losing on its strongest pillars. In economic terms, it’s as if the EU’s 19 smallest economies left at once. A deep and painful loss.

But Eurosceptics are gaining ground not just in the UK but in other member states as well. Nevertheless, Europe’s biggest problem isn’t that it has so many opponents. Rather, its biggest problem is that so few of its supporters are willing to state their allegiance openly and to act accordingly. Even though they know how much we need the EU today and how much more we’ll need it in the future in order to live the way we Europeans take for granted: in peace and prosperity.

For once let’s not look west across the Channel but east, across the former boundary between the twentieth century’s two competing systems, to Eastern Europe. Because there we’ll see what great things we in Europe are still capable of. The EU’s two waves of eastern expansion in 2004 and 2007 put the countries of Central and Eastern Europe where they’d always been and where they belong: in the heart of Europe. The liberation from dictatorship and dependence on a foreign superpower began a success story that has improved the lives of the people who live there and has also enriched all of Europe. Economic growth in Eastern Europe is consistently stronger than in the West and, increasingly, is benefiting ordinary citizens. Although wages are lower than in the West, they’re rising swiftly across the region. At the same time, unemployment is significantly lower. The unemployment rates in the Czech Republic, Poland, and Hungary are now among Europe’s lowest. A shortage of skilled labor is emerging in some job categories, just like in the West. These countries have achieved so much, right in the heart of Europe.

At E.ON, we’re proud to be part of this success story. The roots of our operations in Romania, Slovakia, the Czech Republic, and Hungary extend far into the last century. We supply energy to 7.8 million customers in these countries. Our planned takeover of innogy will significantly enhance our operations in Eastern Europe and extend them to other countries in the region. All of this will benefit our customers there. We’ve witnessed these countries’ impressive progress, economic upswing, and renascent European identity from up close and done our best to support these welcome trends. From our own experience, we’re just as familiar with the successes this has brought as with the almost unavoidable social tension. My many visits to Eastern Europe have given me a lot of sympathy for this region and its warm-hearted, pragmatic people who are justly proud of their achievements. They provide strong evidence that the European idea is alive and deserves the support of Europeans everywhere.

Western Europe perceives some of the EU’s Eastern European members as irritating, or, to put it less diplomatically, obdurate. The debate about issues like migration, the rule of law, and relations with Russia is frequently divided along east-west lines. As a result, some people have an image of Eastern Europe characterized by narrow-mindedness, nationalism, and intolerance. This viewpoint ignores not only the considerable differences between the countries of the region but also the enormous achievements of its peoples. They have every reason to be proud of the democratic institutions they’ve established after decades of repression. And every right, within the bounds of shared European values, to chart their own course. In view of their historical experience, who can seriously wonder that people in Eastern Europe are hypersensitive to patronization from the West. One doesn’t have to defend every political development in Eastern Europe to expect this core region of Europe to be treated respectfully. Western Europe would do well to expend more effort to learn to understand and to respect the specific, historically determined situation of its Eastern neighbors.

Finally, the concerns of Eastern Europeans are shared by many in Western Europe. They too wonder how to belong to an open and tolerant Europe but still retain our countries’ many particularities. The descent of this into chauvinism or narrow-minded nationalism isn’t just a peculiarity of a few Eastern European countries. Bulgarian political scientist Ivan Krastev writes that the divergence between Western and Eastern Europe’s attitudes toward diversity and migration is very similar to the divergence between urban and rural attitudes in the West (After Europe, 2017) In short, Western Europe has no grounds for self-righteousness. The gilets jaunes aren’t marching in Prague or Bucharest. Brexit isn’t taking place in Poland or Hungary. The sense of alienation and uncertainty extending across Europe is dividing—threatens to sunder—the European community. A Europe of elites won’t work.

My interactions in Eastern European countries have shown me again and again that their peoples have retained a strong sense of the plurality of cultural traditions. Of the role plurality plays and the opportunities it creates. That some things should be standardized but not everything. That’s a fundamentally European notion. Plurality is Europe’s strength, particularly today. Because the world has reentered a phase in which technology will play a decisive role in determining the future global distribution of prosperity and the relative competitiveness of the various regions of the world. In this it resembles the race to industrialization of the nineteenth century. But this time Europe is lagging behind. We need to catch up. It would be naive to think we can simply copy Silicon Valley, which emerged at a certain time under very specific circumstances that can’t be replicated. But the preconditions for dynamic innovation aren’t restricted to Silicon Valley: innovations happen where people with a wide variety of personal, cultural, and professional backgrounds can share ideas freely and openly. We can do that in Europe—and perhaps even better than in some other places around the world. A productive plurality is traditionally a European strength that, however, has somewhat fallen from view. Yet as early as 1997 Ernst-Wolfgang Böckenförde, a former judge on Germany’s Federal Constitutional Court, said that Europe is in the process of allowing economic forces to homogenize the peculiarities of its peoples.

Of course, there are areas in Europe where we need a uniform regulatory environment. Energy, climate protection, and telecommunications, to name just three. Of course, the single European market and a common currency provide big advantages for citizens and companies alike. But those alone can’t provide Europe with a good future. Large segments of the population wouldn’t accept the unification of Europe for economic reasons alone or out of cold pragmatism. Europe therefore needs to rediscover its plurality. If we can’t become like the United States and certainly not like China and don’t even want to, then we should become more European again. And that means embracing plurality and utilizing its productivity. In line with its shared values, Europe needs more subsidiarity in decision-making processes, more room for the plurality of regional and cultural identities, more different and attractive ways of living, particularly in rural areas. Europe must once again be a sanctuary for—not a threat to—the right of its citizens to live as they wish.

So let’s talk about Europe. About the Europe that needs you and the other skeptics: your constructive criticism, your commitment, and your vote in the European elections. Particularly at a time when, to use Bertrand Russell’s words, “fools and fanatics are so certain of themselves, and wiser people so full of doubts.”

The letter is part of the article series “Europe can do better. How our continent finds new strength. A wake-up call from economy“, which was initiated by Handelsblatt and United Europe. The series appears in Handelsblatt in German and in German and English on Handelsblatt Online and the website of United Europe until the European Elections. They are also collected in a book which was published on 15 April, 2019 by Herder-Verlag. Please find more information about the book in German here.

About Dr. Johannes Teyssen
Johannes Teyssen was born in Hildesheim, Germany, on October 9, 1959. He studied law and economics in Freiburg, Göttingen and Boston. After finishing his studies, he worked at the University of Göttingen for several years and received a doctorate in law.
He began his professional career at E.ON in 1989, when he joined the electricity generation division of E.ON’s predecessor VEBA in Hanover. There he held various leadership positions, firstly in Legal Affairs and later in Key Account Sales. From 1998 to 2001, Teyssen managed an associated company of the E.ON Group, operating in electricity and gas distribution and sales, with approximately one million customers in the German states of Lower Saxony and Sachsen-Anhalt. From 2001 to 2006 he was a member of the Board of Management of the E.ON Group’s central management company in Munich, responsible for all electricity-related activities, including large-scale electricity generation, transmission grids and the downstream business in Germany as well as in Central and Eastern Europe, initially as Chief Financial Officer and later as Chief Executive Officer.
In 2004, Johannes Teyssen was also appointed to the Board of Management of E.ON SE in Düsseldorf, where he was responsible for the management of all customer- and market-related activities. From 2008 to 2010, he was in charge of managing the Group’s ongoing operations as Vice Chairman of the Board of Management.
In 2010, Johannes Teyssen was appointed to his current role as CEO of E.ON SE. In this position, he is responsible for the E.ON Group’s Strategy and Portfolio, Human Resources, Communications & Political Affairs, Legal & Compliance, Corporate Audit and E.ON’s equity investment in Turkey.
Johannes Teyssen has also played a leading role in various other associations over the past few years. He was President of Eurelectric, the European umbrella organisation of the electricity sector (from 2013 to 2015) and the World Energy Council’s Vice Chair responsible for Europe (from 2006 to 2012). Since 2010, he has been a member of the Presidential Board of the Federation of German Industries (BDI). Since June 2017 he has been a member of the Shareholders’ Committee of Nord Stream AG. 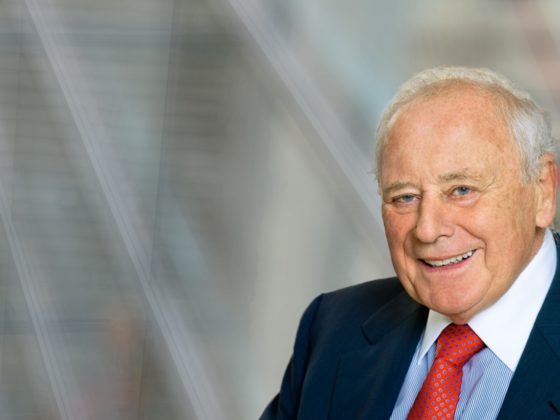