“How to tell the EU’s Story” was the topic of our 14th Young Professionals Seminar (YPS), which took place from June 9th – 10th in beautiful Nice, France.

The seminar was based on the idea that was actually born at a YPS alumni meeting in Helsinki in October 2017. Back then, the alumni discussed the following problem: By publishing almost exclusively negative news and stories about the European Union, the media are also responsible for the increasingly desperate image of the EU. Social media that multiply news and commentaries in an inflationary way also give users the impression that the situation in Europe is extremely bad. It must be possible to tell positive stories about Europe! Can we as a team tell a story about Europe that ignite a new positive spirit for Europe? Thus, the idea of the YPS was born in Nice.
Together with our cooperation partners, the Franco-German Cultural Centre in Nice (CCFA), which generously hosted us in their office spaces and the Institute for Media and Communication Policy in Cologne (IfM), whose founder and director Lutz Hachmeister accompanied the seminar. The seminar was financially supported by Airbus.

The workshop’s aim was to find out about the participants’ views on Europe and how to create new formats to tell positive stories and associations about the EU. At the end of the seminar, participants should also develop a better, more intensive approach to their own creativity so that they can ideally also use it in their professional lives.
During the two short days, which were packed with an intense program, the 19 participants from 12 countries gained insights into the art of storytelling and produced four formats, each telling the EU from a different perspective.

The group received initial input from Tobias Bütow, President of the CCFA, and the media researcher, filmmaker, book author and director of the IfM Lutz Hachmeister, who gave an introduction to the techniques and tricks of interesting and excitingly designed stories.
A short introduction to the basics of storytelling by United Europe’s Managing Directors Sabine Sasse and Julia Reuss should sensitize the participants to the most important questions and principles of successful stories.

Based on the idea that the EU and its benefits offer many positive, surprising and exciting stories, the young Europeans had already been given the task of developing ideas for content and formats at home. Linking that with their own, personal European story was the main task of the seminar.
The prepared ideas were presented by each individual at the beginning of the seminar. The presentations showed a variety of formats and ideas. From the very beginning on, the creativity and the enthusiasm of the participants for Europe were evident. Then, four different ideas were selected. The participants split into four groups to continue working on these four projects in order to create a presentable product.
First, the newly formed groups learned how to focus their individual ideas, i.e. their personal EU story, and how to combine them to a stringent content. For the rest of the day, the focus was on the content for the four projects.

In the evening, to relax and to get some cultural input, Lutz Hachmeister, who has already made several documentary films about the French Riviera and is currently working on a book about the history of this region, gave an exciting lesson about the special European history of the Cote d’Azur with excerpts from his films.

On the following day, it was all about formats. The key question was which channels suit best to the developed stories and how to implement the stories most effectively in the media.
At the end of the seminar’s second day, the four groups presented their wonderful media products. 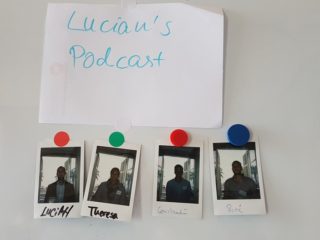 The composition of his group, all Germans – with Theresa Petrausch, PhD student from Nuremberg, Constantin von Rex, head of the credit insurance service at a large insurance company, and René Okle, product manager at a surface technology company – confirmed that podcasts are enjoying enormously growing popularity in Germany. The four produced an impressive podcast about Lucian’s experience at the YPS, starting with his application, the trip to Nice and the encounter with the many different people there. The central content was the positive and enriching experience of spending a weekend discussing about Europe with almost 20 other young Europeans from different countries and very different social and professional backgrounds, while at the same time developing creative and pro-European projects. By producing that rousing podcast, Lucian’s team gave a very nice, coherent picture of the positive and enriching experiences, our participants collected at the YPS in Nice.
You can listen to Lucian’s Podcast here:

Vanessa’s Game:
Vanessa Bianchi is from Italy and works in the European Parliament as assistant to the chairman of the Budget Commission. The idea for their project is based on the idea of getting information about Europe in a playful and entertaini 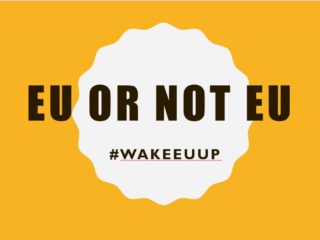 ng way. Together with her group – Mariam Symonova, an artist from Ukraine, Nicole Tschauder, mathematician and data scientist at a large software company, and Tamar (Tako) Svanidze, journalist from Georgia – she produced various playful forms such as right/false episodes that uncover fake news about Europe; Photos of the EU and non-EU countries illustrating European prosperity or small quiz questions informing about positive facts. As a channel, the group proposed an app for mobile devices or alternatively a daily mail newsletter in the form of a “daily bite of Europe”. But of course, the product can also be used quite traditionally and analogously with cards.

Find the presentation of Vanessa’s Game here: #WakeEUup – EU or not EU – That is the Question

Hermanni’s School Project:
Hermanni Vanha-Jaakkola, born and raised in Finland, is an enthusiastic European, who benefited a lot from 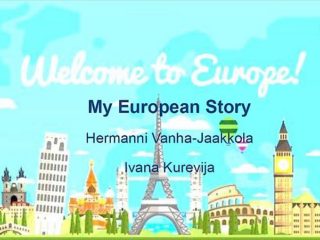 Europe, especially during his studies. His project idea is based on the fact that Europe and its advantages still seem relatively abstract for young people aged between 15 and 17. To bring young people of this age group closer to Europe, Hermanni and his team – Miháli Szábo, researcher and country director from Hungary, Martin Pulpitel, founder and CEO of a large Czech start-up and Ivana Kurevija from Croatia, who works in the area of change management & personnel development for a large consulting firm – have developed his idea into a school project. The aim is to inspire pupils/students for Europe by giving a short, lively lecture. It is evident, that this works best when such as lecture is illustrated by a personal story. Hermanni imagines that a student who has already gained European experience through travel, Erasmus programmes or seminars, for example, will return to his school and report on it visually and simply. Hermanni and his group were extremely creative during their demonstration and described their personal European history in a lively and rousing way. They created a fictional Facebook fan page with several sample stories and millions of followers. In the implementation – it was decided with a twinkling eye – we would not use Facebook, but the European network Euroface, which unfortunately has not yet been invented.
The presentation of Hermanni and his group can be found here:  YP Nice Hermanni Vanha-Jaakkola presentation 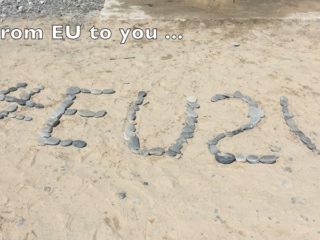 Silja Raunio is a young Finnish journalist specialising in radio productions Together with her five colleagues – Daniela Cerna from the Czech Republic, who works as a marketing expert for a large German company, Wiktoria Nycz, project and community manager from Poland, Kasia Kacprzak, insurance broker in a large international insurance broker in Poland, Christine Bunte, Industry Advocacy in the Brussels office of a large German company, and the Slovak investigative journalist Martin Turcek – she managed to shoot a real video film by the simplest means. The protagonists were fictional characters who they asked about their positive European experiences on the streets of Nice. The result was a very honest and colourful film that beautifully illustrates the individual merits of Europe.
Please find Silja’s Media Video Campaign here.

RÉSUMÉ:
It was amazing to observe at what level all groups managed to realize their project ideas in a relatively short time and with only very limited technical means. The results are jolly, interesting and creative proposals for communicating the EU and Europe’s benefits in various ways to the public: whether journalistic, playful or educational. The goal was not to get perfect results; in the short period of time, perfect results were not to be expected. The aim was to challenge the creativity of young professionals and to motivate them to engage with the EU in a different way. We were looking for the unusual way, far beyond from the usual reporting and public opinion, in order to gain new perspectives on Europe and the EU. The demanding challenge of the task and the diversity of the participants, who all have different perspectives on Europe, helped enormously.

At the end of the seminar, everyone left with the conviction that Europe has countless positive stories to tell. It’s worth reporting. These are exciting, touching and interesting stories that are written in Europe and by Europeans every day. The media, politics and the EU Commission often seem to focus on the critical and negative aspects of Europe in everyday life. But a new pathos for Europe can only emerge if we hear, read, see and describe the positive achievements and the countless beautiful, individual stories associated with them about Europe.
With our seminar we have taken a first step towards telling the history of the EU in a different way. Four fantastic projects have been created, and maybe one or the other will be developed further. For sure, United Europe will follow and support the developments.

VOICES FROM OUR COOPERATION PARTNERS:
Tobias Bütow: “Europe’s founding generation of the post-war era is radically different from the young generation in 2018. It is our task – be it on the Mediterranean coast, in Ukraine or in Scandinavia – to inspire young people for Europe. Mobility, intercultural competence and team commitment are crucial for this. In the 21st century, learning does not end in the classroom or in the auditorium, it’s a lifelong challenge. Connecting young professionals from all over Europe is a result-oriented way of shaping Europe’s future in a timely, innovative and peace-fostering way. United Europe lives this idea – we hope for many joint future projects.”

Lutz Hachmeister: “Enjoying the colours of the Côte d’Azur and the delicious cuisine niçoise and, above all, discussing it with inspiring young Europeans – this experience should definitely be continued. The IfM would be proud to be a partner again next year!”

FEEDBACK FROM OUR YOUNG PROFESSIONALS:
„It was a real pleasure to participate in YPS!! Thank you for providing me the possibility to be a member of such an inspiring group and thanks again for the perfect organisation. It was unforgettable :)“

“Your work is very needed! We have to fight for EU.”

“I really enjoyed the melting pot of people and to hear such different enjoying personal stories (and great city)!”

“This seminar was an amazing experience.”

“You succeeded in bringing together an outstanding group of young people. It was a great experience, I enjoyed it a lot.”

“The content, the guest lectures, hearing about different European aspects. People are very innovative and inspiring. We made great innovations and networks.”

If you want to find out more about our Young Professionals Seminars please click here.