Inspired by the article series “Europe can do better”, published by United Europe and German newspaper “Handelsblatt”, the Dutch newspaper “Het financial Dagblad” has published views of eight Dutch CEOs and their visions for a joint and competitive EU. Please find following the article of Lard Friese, CEO of NN Group:

European cooperation started in the 1950s to achieve stability after a long period of wars between neighboring countries. European integration through economic and political cooperation, with the aim of achieving peace. It is a good thing that we continue to debate the pros and cons, what can be arranged nationally and what can be arranged together, the modernisation of the association and the improvement of the governance model and effectiveness. But let us not lose sight of the fact that our generation benefits from the stability, security and prosperity that this unique, multilateral cooperation has brought. Certainly now, at a time when the world is facing major geopolitical issues relating to trade, security, migration and climate.

Life expectancy
The European Union plays an important role in challenges that are the same for every country, despite the many cultural differences. These are major issues for present and future generations that do not recognise national borders, such as – close to my own daily practice – the ageing of the population. It does not matter which country you come from or which political affiliation you have, the demographic reality that we are getting older applies to all the countries in the Union. And this has consequences. Since the 1950s, people’s life expectancy has increased, and in future, there will be more elderly people than young people. Today, in the EU, approximately one-fifth of the population is over 65, and in 20 years’ time it will be almost one third. There seems to be relatively little attention paid to this issue in the European political debate. European countries are preparing for this demographic reality in different ways, but the starting position is different everywhere. Many Eastern European countries are still in the early stages of building up a sustainable pension system. In some large European countries, there is mainly a public pension for which the question is how sustainable its financing is. In other countries – such as the Netherlands – considerable savings have been made for old age. But even in our country, we cannot avoid the need to adapt the system to today’s society, which, in my view, should lead to a more personal pension.

Responsibility
No matter how the system is set up per country, the demographic clock is ticking. In addition, in many countries governments are partly withdrawing from their caring role and people are increasingly becoming responsible for their own pensions. Saving is less attractive due to the low interest rate and at the same time, financial institutions can offer fewer guarantees (in an affordable manner), partly due to regulations. As a result, risks are increasingly shifting to people themselves. This means that, more than in the past, households in Europe have to make their own choices and take responsibility for their (long-term) financial planning, for the organisation of their pensions and for the way in which they build up assets in an environment of very low-interest rates. And yet we know that most people have only a limited interest in financial issues. As a sector itself, we will have to work hard, together with governments, to increase consumers’ knowledge and awareness. And we need to help people make informed financial choices. The organisation of pension systems is mainly a national matter. However, it is a good thing that the EU is constantly mindful of the importance of responsible pension accrual. We can also work together much more on issues such as awareness and education. We must keep the regulations on the communication of financial products effective, simple and comprehensible. As far as I am concerned, financial education should be an integral part of the education curriculum, everywhere. So that together we can pass on to future generations the stability and prosperity that Europe has brought us. 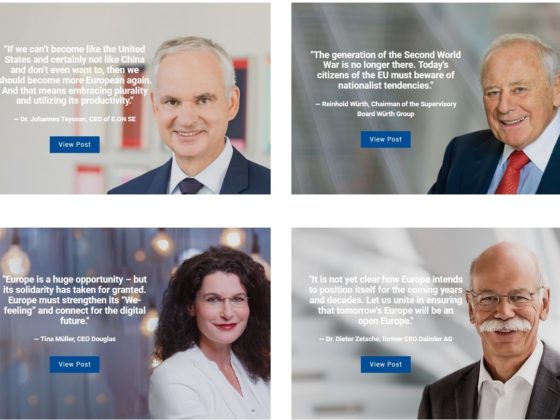 Take a look at our “Prominent Opinions”