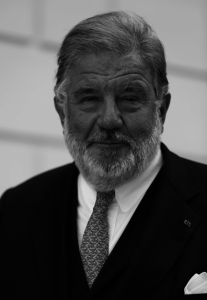 Born March 4, 1952, in Mülheim an der Ruhr, Jürgen Großmann studied metallurgical engineering and business administration in Germany and the United States. After his thesis in Brazil he received his doctorate at Berlin’s Technical University.

At the age of 28, he started out at the German steel maker Klöckner-Werke AG where he worked his way up into the board. At 41, he bought the bankrupt steel mill Georgsmarienhütte from Klöckner for the symbolic price of two Deutschmark.

After the management buy-out, he restructured Georgsmarienhütte and built it into a holding company which he still owns and which today employs 10,400 workers and accounts for nearly EUR 2.5 billion in revenue. The 37 companies under its roof are mostly active in steel producing and steel processing. From 2007 to 2012, Jürgen Großmann was CEO of RWE, Germany’s largest domestic energy producer. From 1998 onwards, he also served on the supervisory board of a number of corporations including Volkswagen AG, Deutsche Post AG, Messer Group and Tognum.

Currently, Jürgen Großmann is member of the supervisory board of Deutsche Bahn AG, chairman of SURTECO S.E., Hanover Acceptances Group London and British American Tobacco Germany. He is also part of the JPMorgan Chase International Council and chairman of the board of trustees of RAG-Stiftung, the main chair holder of Evonik and national German coal producer RAG.

In 2013, Jürgen Großmann initiated the association United Europe together the former Austrian chancellor Wolfgang Schüssel. with In terms of civic involvement, he is also one of the initiators of the ALS initiative in cooperation with the Charité Hospital in Berlin.

Jürgen Großmann is a member of the board of the Atlantik-Brücke which honored him with the Vernon A. Walters Award; besides, he is member of the Tönissteiner Group, the American Council on Germany and honorary chairman of the German-British Society. He was awarded an honorary doctorate by Purdue University.

The German chancellor Dr. Angela Merkel appointed Jürgen Großmann to serve on the National Commission for Innovation (until 2014) and the National Platform for Electro Mobility (until 2013). In 2011/2012 he also served as Chairman of GSEP (Global Sustainable Energy Partnership), an association of many of the largest utilities of the G20 countries.

For his commitment to steel manufacturing in Georgsmarienhütte, Jürgen Großmann in 1997 received the „Courage“-Medal. He was also awarded the Niedersachsenpreis in 2001. Other honors include the Order of Merit of the Federal Republic, First Class, as well as the Grand Gold Decoration for Services to the Republic of Austria.

Großmann likes sailing, hunting, skiing and playing cards. He takes great pride in the fact that his restaurant “la vie” located in Osnabrück was awarded three stars by the Michelin guide.