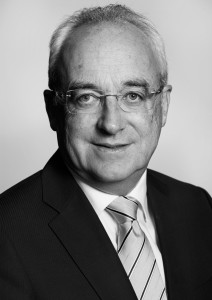 Christoph Riess has been managing director of United Europe since October of 2014. As an experienced international manager, he is primarily responsible for the association’s administration and finances. Riess has been with United Europe as project director since its beginnings in March 2013.

Having graduated as an industrial engineer from the University of Karlsruhe, Riess has held management positions in the media, printing and paper industry as well as in mechanical engineering. He has spent ten years working abroad and speaks German, English, Spanish and Portuguese fluently.

Riess worked for 15 years at the media group Bertelsmann AG, serving as CFO or CEO at various subsidiaries, until he joined the board of Bertelsmann Company Falk Verlag AG as the member responsible for production and sales. He then went on to become Managing Director at Heidelberger Druckmaschinen AG where he was in charge of the Sales and Service Units in Western Europe with 2,600 employees and sales of € 2 billion. From 2001, Riess served as CEO of the German subsidiaries of Australian PaperlinX Group for nearly 7 years.

Since 2009, Riess has been working as interim manager. During this time, he restructured the worldwide sales organization of Mitsubishi Paper Holding (Europe) as Sales and Marketing Director. From 2010 to 2012, Riess was also responsible for the post-merger integration and recovery of WAN-IFRA (World Association of Newspapers and News Publishers). He served as CEO of this association based in Paris and Darmstadt and with offices in Stockholm, Madrid, Lyon, Chennai and Singapore, representing 18,000 publications and 15,000 web-sites worldwide.

Riess holds various advisory and supervisory functions in the SME sector in Germany and abroad since 2003. He served as president of Germany’s association of paper wholesalers, the BVddP.