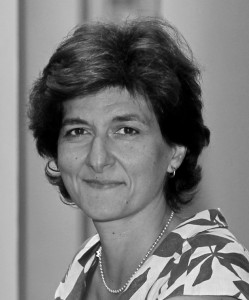 Sylvie Goulard is a founding member of United Europe; she has also served as Vice-President. After she has been appointed deputy governor of France’s central bank on 17th January, 2018, she had to give up her honorary office at United Europe.

Sylvie Goulard is a French liberal politician. She was first elected to the European Parliament in 2009. For several years, Goulard was at the forefront of the EU’s efforts to contain the Euro crisis for several years, serving on the Economic and Financial Committee (ECON).  For example she was one of the rapporteurs for the “Six-Pack” regulation which reinforced the Stability Growth Pact, rapporteur for the text creating the European Systemic Risk Board, as well as rapporteur for the Parliament initiative report concerning Eurobonds.

Goulard, born in Marseille on December 6, 1964, represented the South-East constituency of France. In the European Parliament she was a member of the Liberal group (ALDE) where she was coordinator for economic and monetary affairs. Goulard was also a substitute member of the Committee for Constitutional Affairs (AFCO) and president of the intergroup fighting against poverty.

Her academic qualifications include a law degree from the University in Aix-en-Provence (1984) as well as a degree from the Institut d’Etudes Politiques (Sciences Po, Paris 1986)  and the distinguished Ecole Nationale d’Administration (ENA, 1989),  institutions where many of France’s best known politicians, managers and top civil servants received their education.

Goulard began her professional career in 1989 at the French Foreign Ministry where she worked on the so-called Two-Plus-Four Treaty on German unification which involved the two German states as well as the United States, France, Britain and Russia. After a brief intermission at the Conseil d’Etat she joined the Foreign Ministry’s planning staff for three years specializing on European policy and coordination with the German Foreign Ministry. From 1999 to 2001, Goulard worked as an analyst at the Social Sciences Research Center (CERI) of the Institut d’Etudes Politiques. In 2001, Sylvie Goulard moved to Brussels to become political advisor to European Commission President Romano Prodi on the European Convention and other issues.

With her numerous books on Europe, Goulard has reached a wide public. Her latest book, published in May 2016, is called “Goodbye Europe”. In 2012, she published a book on democracy in Europe together with Mario Monti.  Her book „L’Europe pour les Nuls“ (2007) which was published in 2007, was awarded the European Book Prize. From 2006 to 2010, Goulard was also president of the European Movement in France.

„...this beautiful colorfulness of Europe, this diversity that is tolerant and open to the world“