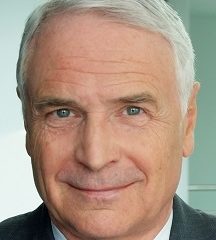 Walter Schlebusch has been a member of the G&D Management Board since 2000. Prior to his appointment as CEO in July 2013 he was responsible for the banknote business unit, which incorporates the production of banknote and security paper, as well as banknote printing and processing and supplies over 150 countries. When he says “People need to put trust in the currency,” he´s not talking about the euro crisis – he’s talking about protecting banknotes from forgery.

Born on January 10, 1949, Schlebusch studied engineering from 1968 to 1974 at the distinguished RWTH Aachen University. After graduating from university, he was appointed the university’s press officer before going on to become research assistant to the chair for metallurgy in reactor fuel and theoretical metallurgy. Schlebusch received his doctorate from RWTH in 1981. He then went to Brazil where he worked as an engineering consultant for the state government of Santa Catarina.

In 1982, Schlebusch returned to Germany to work as a management assistant at a research institute for engineers specializing in steel technology (Betriebsforschungsinstitut des Vereins Deutscher Eisenhüttenleute). In 1984, he moved to Klöckner Werke AG in Duisburg, where  he was made managing director of Klöckner Contracting Technologie GmbH (KCT), Hamburg, in 1986. Following the sale of KCT to the Düsseldorf-based Deutsche Voest-Alpine Industrieanlagen GmbH, in 1990, he became spokesman for its management board. In 1995, Schlebusch joined Lurgi AG in Frankfurt, where he served as chairman of the board of Lurgi Metallurgie GmbH. The following year, he was appointed to the management board of Lurgi AG.

In terms of his civil society commitments, Walter Schlebusch was president of the Student Union during his time at university. Since 2007, he has chaired the committee responsible for improving the quality of research and teaching at the RWTH Aachen University. He was awarded the University Medal Aachen and the German-Malayan Society’s medal. Since 2001, he has also acted as chairman of the association for friends and sponsors of the State Numismatic Collection in Munich.