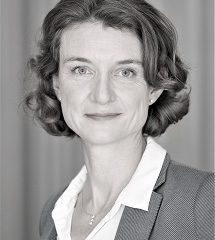 Dr. Daniela Schwarzer is a leading political analyst, lecturer and advisor on EU affairs. Since November 2016, she is Otto Wolff Director of the Research Institute of the DGAP (German Council on Foreign Relations).

She previously was an executive team member of the German Marshall Fund of the United States, serving as GMF’s senior director of research and heading GMF’s Berlin office as well as its Europe program. Prior to this she spent eight years at the German Institute for International and Security Affairs (SWP), where she led the research group on European integration from 2008 to 2013. During this time she advised Poland and France during their respective EU Council presidencies, served as a consultant to the Centre d’Analyse Stratégique for the French prime minister, and was a member of the “Europe” working group of the Whitebook Commission on Foreign and European Policy. Before joining SWP, she worked as an opinion page editor and France correspondent for Financial Times Deutschland.

Daniela Schwarzer has held a senior research professorship at Johns Hopkins University’s School of Advanced International Studies (SAIS) in Washington, DC/Bologna since 2014 and was a Fritz Thyssen Fellow at Harvard University’s Weatherhead Center for International Affairs in 2012–13. She taught for several years at the Hertie School of Governance and has lectured at the Collège d’Europe in Bruges, the Institute of European Studies of Macau, and the Universität Salzburg. In addition, she serves on the advisory boards of the European Council on Foreign Relations (ECFR) and the Jacques Delors Institute in Paris and is a non-executive board member of BNP Paribas.

In her work, Schwarzer is driven by the idea that even today, Europe’s political and social stability and economic prosperity cannot be taken for granted. Born in Hamburg in 1973, she studied political science and linguistics in Tübingen, Reading in England and at Sciences Po in Paris. She received her doctorate in political economy in 2005 from the Free University in Berlin. Her thesis “Fiscal Policy Coordination in the Euro Area” remains highly relevant.

We continue the 🇪🇺United Europe Advocacy Program 🇪🇺 series with the final article: “Why the answer to global chal… https://t.co/qIsXWS1z12
12 hours ago
Follow