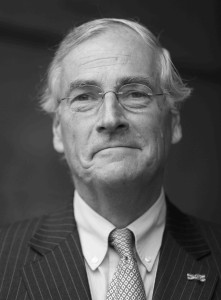 Anthony Ruys, former CEO of Heineken, is a Dutch manager with wide international experience. He has been chairman of the supervisory board of Amsterdam’s Schiphol Airport until 2017. He was a member of the supervisory boards of British American Tobacco until 2016, Janivo Holding BV (until 2017) and Indian Tobacco Company (until 2017).He is currently a non-executive board member of Intertrust Holding NV and of Hunter Douglas NV , Ruys is a member of the International Advisory Board of Van Lanschot Kempen.

At United Europe, Ruys is particularly interested in projects involving the younger generation – after all, it is their ideas and expectation which are going to determine Europe’s future. Ruys, who was born on July 20, 1947, is mentoring United Europe’s series of workshops for outstanding young professionals from the EU.

Ruys holds a Master’s degree in civil law from the University of Utrecht. In 1974, he started his professional career as a marketing trainee at Unilever in Rotterdam. He stayed with the group for 19 years during which he worked as a manager in Colombia, Italy and the Netherlands. During this time, he also completed the Advanced Management Program at the Harvard Business School.

In 1993 Ruys joined the board of Heineken in Amsterdam with responsibility for global marketing. From 1996 to 2002 he was deputy chairman of Heineken before being appointed chairman of the board, a position he held until 2005.

One cause particularly close to his heart is the Dutch AIDS Foundation where he is serving as chairman of the supervisory board. Ruys’ interest in the issue goes back to his time at Heineken when he was in charge of developing an AIDS policy for employees in Africa.

In 2004, Ruys was named Commander of the Spanish Order of Civil Merit. One year later, he was appointed Officer of the Dutch Order of Orange Nassau.

„We are seeing a new global distribution of power politically, militarily and economically. The question is: Where… https://t.co/D7rBzcsREt
about 1 hour ago
Follow